Arreola: Wilder Athletic, Powerful - I Need to Move My Head!

Chris Arreola has never been hard to hit. That could be quite an issue against Deontay Wilder, the power-puncher who’ll be defending his heavyweight title against Arreola on Fox on July 16 in Alabama.

“Main thing is I got to move my head,” Arreola said. “[Vitali] Klitschko f***ing clobbered me with jabs and right hands, left and right [in Arreola’s stoppage loss to him in 2009]. I believe he threw the most punches he’d thrown in his career against me. That’s because I just kept pressuring. 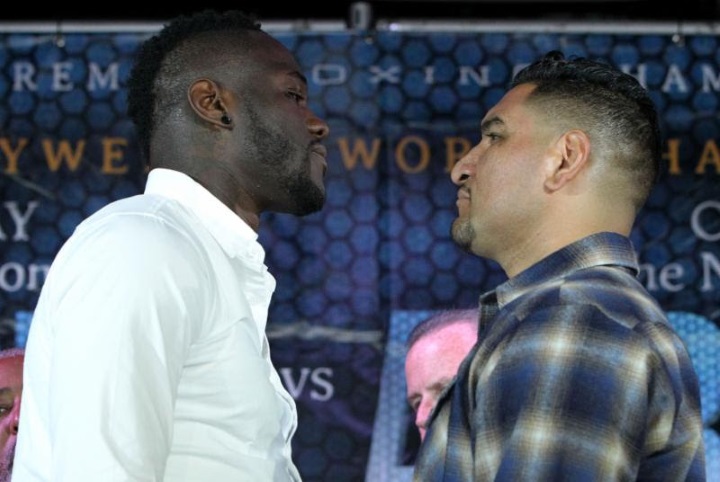 "The thing about it is I got to do it a lot smarter and I got to be more athletic about it, because Deontay is a lot more athletic a fighter than Klitschko is and he moves a whole lot better around the ring.

“Klitschko was more methodical and makes sure he moves just a tad bit. He didn’t waste no energy. I just got to try to keep Deontay on his heels. That’s going to be a big task in itself. Just come behind a smart jab and not get caught with that dangerous right hand he has.”

Other fighters have been able to land leather on Wilder before, including in his three previous defenses against Eric Molina, Johann Duhaupas and Artur Szpilka. Wilder handled them, then dispatched them.

Arreola has shown power, but he was also stopped by Bermane Stiverne in their May 2014 rematch. The Klitschko loss came after 10 rounds of accumulated punishment.

[QUOTE=bambam182;16847009]hahaha i can picture you yelling that from the stands but the second arreola walked towards you, you would book it lol.[/QUOTE] Run from Arreola isn't an option as that pillow nose on the that tattoed slob would be a…

[QUOTE=vitali1999;16847011]As is the case with all of his fights, as will be the case with his next opponent. BUM SQUAD !!!![/QUOTE] PEDvetkin is a slow communist robot drugged up but still very average with little mobility and not much else…

Chris can move his head but can he move his double chin?

Seth Mitchell has been better than Wilder. its a shame that Mitchell aint fighting anymore, he would be the king by now and a Mike Tyson 2.0