In just 13 pro fights, WBO super flyweight champion Naoya Inoue has lived up to his nickname “Monster.” But his next opponent, Cleveland’s Antonio Nieves, isn’t losing any sleep thinking about what he’s going to be facing in their bout on September 9.

“I’m sleeping like a baby,” Nieves laughs. “I got to get up too early to run to be thinking about him.”

In fact, before he was presented with an opportunity to challenge for a title on the “Superfly” card at StubHub Center, he didn’t even know who the knockout artist from Kanagawa was.

Fighting primarily as a bantamweight, with a few forays to the super bantamweight class, left the 30-year-old a little surprised when he got the call to drop down to fight for a world title, especially after coming off a loss – albeit a disputed one – to Nikolai Potapov in March.

“They could have went a different route with other fighters, but here we are,” said Nieves (17-1-2, 9 KOs), who doesn’t see the move down to super flyweight being a problem.

“Nah, it’s not an issue,” he said. “There are a couple fights where I weighed in at 116 without even trying to make 118, eating a light breakfast before the weigh-in. So 115 won’t be difficult to make. We’ve just got to adjust our diet a little, but I’ll be fine.” 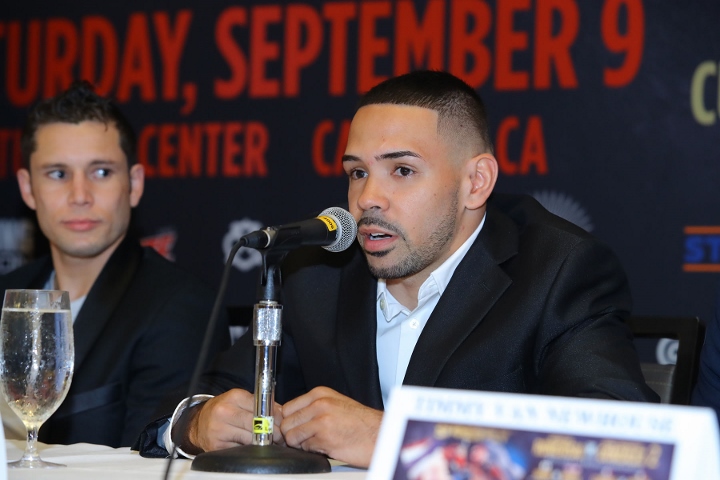 If it’s a sacrifice that needs to be made, Nieves will take it, because in this sport, opportunities like this don’t come around too often, especially ones that can change his life in the space of 12 rounds.

“I know that it’s a life-changing fight,” he said. “I understand that when I win this, it’s gonna change everything. Bigger fights, bigger paydays. And that’s how I’m taking it because not many people get a chance like this ever in their life. So I’m coming into this fight with that, I know I’m going to do everything that I have to do to be victorious that night, and it’s going to be life-changing.”

That doesn’t mean dethroning Inoue will prompt Nieves to give two weeks’ notice to the PNC Bank where he has been working for years.

“I like what I do, I like helping people and the team here is great, and it distracts me from everything else we have going on,” he said. “So I’m gonna stick around and go as long as I can. They work with me when I need time off to train for a big fight like this, and you’ve always got to have a Plan B. Boxing’s here today but it might not be here tomorrow.”

Today is here, though, and while he’s the B-side for Inoue’s highly anticipated U.S. debut, he’s not intimidated in the slightest by his opponent’s reputation or skill set.

“He’s a great fighter,” Nieves said. “He has fast hands, he’s strong and he’s a solid fighter overall, but I don’t see anything super spectacular about him. Yeah, he’s strong and he’s quick, but that’s pretty much it. He’s an all-around fighter, but there are a lot of people out there like that who haven’t got the spotlight he has.”

Nieves hasn’t received that spotlight yet, but it’s coming in a little over a month, and like the athletes from Cleveland who delivered championships in recent years, including Nieves’ friend and UFC heavyweight champion Stipe Mioic, he’s aiming to win not just for himself and his family, but for his city.

“It motivates me,” he said. “I’m coming out of the same gym as the UFC heavyweight champion of the world and we’re really good friends. And it motivates me to keep pushing and keep doing what we’re doing. Let’s put our name on the map a little more. My parents came from Puerto Rico, but I was born here and this city has given me everything I have, so I want to see it continue to grow and do good and I want to be part of it.”

All he has to do is tame the “Monster.”