Antonio Nieves: I'm Fired Up, ShoBox Opportunity Fires Me Up

Bantamweight Antonio Nieves understands he is not the face of sports in Cleveland, Ohio. That distinction goes to LeBron James.

Not that will not stop Nieves from becoming the face of boxing in that city.

The unbeaten bantamweight has put together a modest record, but there's more to be accomplished if he wants to fulfill his dream of becoming a world titleholder, along with being a household name in Cleveland. 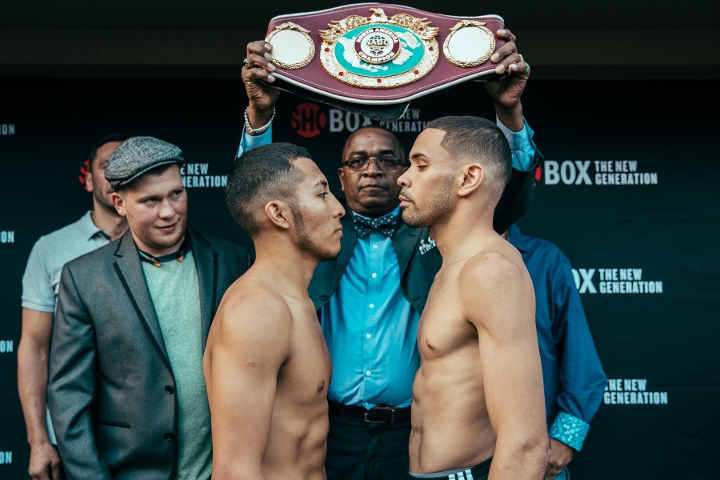 Nieves will face Alejandro Santiago Friday night at Rhinos Stadium in Rochester, N.Y. The 10 round bout will be part of the four-bout 'ShoBox' broadcast on Showtime, beginning at 10 p.m. ET/ 7 p.m. PT.

In his last bout on June 18, Nieves (16-0-1, 8 knockouts) won a 10 round unanimous decision over Oscar Mojica. The win marked his fourth consecutive victory since a split draw against Stephon Young in June of last year.

Nieves will face a fighter in Santiago (11-2-1, 3 KOs), who will be fighting for the first time outside of Mexico and has won his last three fights in a row.

Friday night will also mark the first time he will be fighting in a nationally-televised bout.

"I'm very excited that I get to showcase my skills to a national audience," Nieves told Boxingscene.com Thursday morning. "This opportunity fires me up and I'm more motivated because opportunities like this don't come around often."

Nieves has been around the fight game since age seven, but not exclusively through boxing. The 29-year-old Nieves began kickboxing at age seven, eventually picking up the sweet science as a teenager.

Nieves has been a pro since November of 2011.

"What I've done at age seven has allowed me to be disciplined," said Nieves, who also works as a banker. "At that age, I learned to dedicate myself to working hard in the gym and that's really helped me to this day. I feel it's an advantage I have over my opponents."

The success Nieves has had thus far as a pro has drawn more attention from sports fans in Cleveland. He hopes to become the face of boxing in the city, which recently celebrated an NBA title that was won by the Cavaliers.

"I want to bring that excitement to Cleveland, but for boxing. I want to fight before thousands of people in Cleveland."

For now, he has to get by Santiago.

An impressive performance Friday night would mean a possible return to network television or a bigger-money fight.

"Opportunities like this is where I want to leave it all in the ring. I want to fight the best and I have to beat fighters like Santiago to face the best in the division."

"That's my mentality to the very end. I want that world title shot."

Francisco A. Salazar has written for RingTV since September of 2012 and has covered boxing in Southern California and abroad since 2000. Francisco also covers boxing for the Ventura County (Calif.) Star newspaper, RingTV, and Knockout Nation. He can be reached by email at [email protected] or on Twitter at FSalazarBoxing

why does the author say this guy is the face of sports in cleveland? LeBron James, hell Tristan Thompson is a bigger face than some random boxer smh. He is less known that the backup tackle on the Browns LMAO.…