Anthony Sims Jr is back in action at the Wintrust Arena in Chicago on October 6, live on DAZN – and the Light-Heavyweight talent is looking for rounds under the belt to target the big names in 2019 – including IBF champion Artur Beterbiev who defends his title against unbeaten Brit Callum Johnson on the stacked bill

Sims Jr boxed for the first time in 16 months in August in Cardiff, Wales and moved to 15-0 with his 14th stoppage win since his pro debut in April 2014.

That was the Indiana man’s first fight with new promoter Eddie Hearn, and number two takes him to the Windy City as the 23 year old looks to launch his attack on the 175lb division, with a chance to see Beterbiev and Johnson at close quarters on the night. 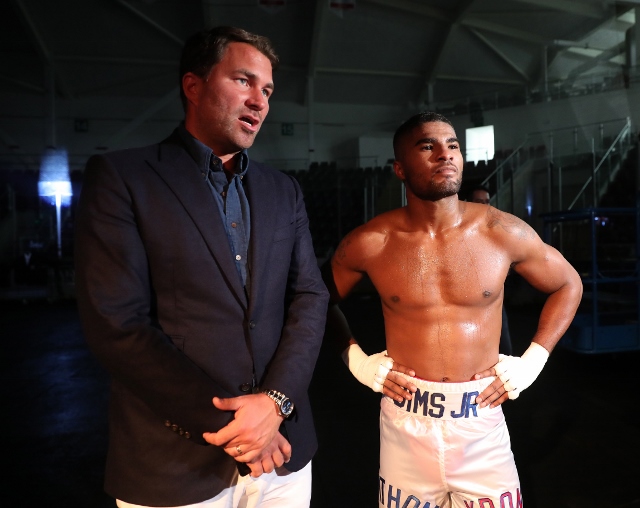 “I haven’t been treated this way since I started boxing,” said Sims Jr. on teaming up with Hearn. “It was great to be back in the ring for the first time in two years in Cardiff, and now it’s time to step it up some more.

“I got some rounds and got the stoppage in the UK, but I was so excited to be back in there and was head-hunting a bit. In Chicago I’ll be more patient and pick my shots, and I’ll look even better. The ring rust is coming off.”

Sims Jr will have plenty of support in the Wintrust Arena with a bus full of kids from his Sims Boxing Gym in Plainfield, Indiana making the trip to roar him on.

“It’s great to have the kids heading down for the show,” said Sims Jr. “There’s some really talented kids in the gym that just love the sport, so to have them make the trip and not only support me, but watch a great night of boxing with some huge stars, is only going to make them love the game even more.”

“Everyone knows about Anthony Sims Jr, he’s the worst kept secret in boxing,” said Hearn. “He’s been inactive, he’s had some disputes, and he’s been frustrated. But he’s rolling again now. You’re going to get to see his personality come out along with seeing his punch power.

“Every camp he goes into, everyone talks about him. Ask George Groves and Dmitry Bivol about him. He’s in a stacked division and he’s ready-made - 15-0 and just needs one or two more and then he’s ready for the big fights. He’s the perfect guy for what we are doing in the States with DAZN. Anthony fights in Chicago and then we go again in December – and in 2019 we’re ready for all the big fights.”

Sims Jr is part of a massive night of action in Chicago, topped by the WBC Silver Welterweight title clash between Jessie Vargas and Thomas Dulorme

Along with these World stars and promising youngsters, Chicago fight fans will be able to back two of their own on the night, with former World Lightweight title challenger Jessica McCaskill in action on the bill along with unbeaten Bantamweight prospect Shawn Simpson.

[QUOTE=Randall Cunning;19144856]I hardly know a thing about Ennis, only think ive ever seen you mention him. Haneys already Showtime umbrella aint he? Doubt he'll move away from that[/QUOTE] Haney has fought only on ShoBox. Give him a great offer and…

[QUOTE=KTFOKING;19144783]Bivol is a must get for him as he already has Beterbiev. Aside from that there isn't much there at HBO to get. I mean you have GBP fighters but they aren't available. That's why I mentioned Haney/Ennis in particular.[/QUOTE]…

[QUOTE=Randall Cunning;19144772]Been thinking what Hearn could likely get out of this HBO thing. Suspect Bivol is a lock now, Smith Jr on his New York card, then Beterbiev unification. Also Jamie McDonnell supposed to be on his Vegas card, vs…

[QUOTE=KTFOKING;19144725]Hearn needs to sign these youngsters and build them into marquee names. This has to be his strategy now. Don't know much about the top Mexican amateur he signed, but he seems to be a good one. Yeleussinov may just…