Will Anthony Joshua's Mind Be Right For The Ruiz Rematch?

Anthony Joshua’s decision to face Andy Ruiz a second time with no interim bouts might be the biggest mistake of his career.

Joshua, who is scheduled to face the heavyweight titleholder on December 7 in Saudi Arabia, could erase the result of their first meeting – Ruiz’s stunning seventh-round knockout in June – by turning the tables on the Mexican-American. Think Lennox Lewis in his rematches with Oliver McCall and Hasim Rahman.

Joshua could also lose again, which would make it difficult to imagine him ever ruling the heavyweight division again.

Lewis proved that an elite fighter can bounce back from a knockout loss by reversing the result in his next fight, as he did with Rahman. The potential problem for Joshua is that the scenarios really aren’t comparable.

One, Lewis had a lot more experience than Joshua when Rahman stopped him in 2001. Two, Lewis knew he could bounce back from a knockout loss because he already did it against McCall. And, three, even though both Lewis and Joshua were hurt badly by a single punch, what followed was different.

Lewis was nailed by a monstrous right hand and the fight was stopped immediately, which can happen in any heavyweight fight. Lewis could say with legitimacy, “Hey, I got caught.”

Ruiz hurt Joshua with a left hook above the right ear in a crazy third round, during which Ruiz got up from a knockdown to put Joshua on the canvas twice. Joshua, like Lewis, never fully recovered from the original blow to the head. The difference between Lewis-Rahman and Joshua-Ruiz was that the latter fight continued for another three-plus rounds, a period during which Joshua went down two more times and had his confidence evaporate before our eyes. 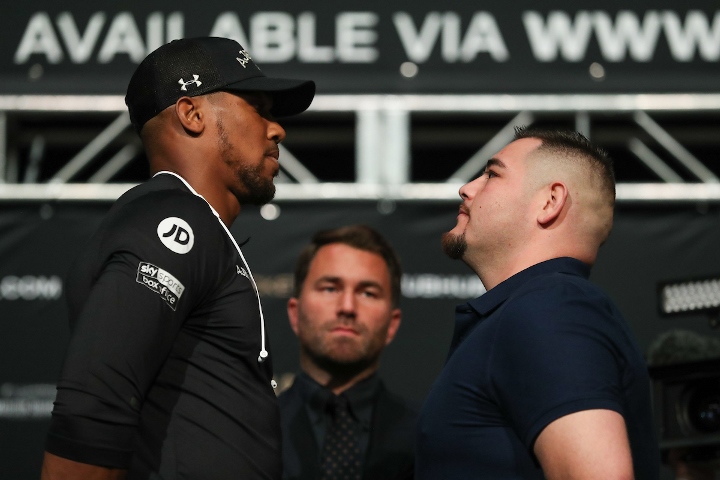 Joshua seemed to say by his body language moments before the fight was stopped by referee Michael Griffin, “I just don’t know what to do here.”

I really don’t want to play amateur psychologist but I have to wonder what long term impact a traumatic experience like that has on a fighter’s psyche. Can the victim simply put it in the past, as Joshua implies he has done? Or does it take time to rebuild confidence after it’s pounded out of you?

Joshua is saying the right things – “If you put me and Ruiz in a machine, nine times out of 10 I should beat him. That was just his night.” – but I wonder whether he really believes that or is trying to convince himself.

If I were advising Joshua, I probably would’ve suggested he take an interim fight. Let him demonstrate to himself against a second-tier opponent that the loss to Ruiz was a blip and that he remains the best heavyweight in the world before facing the fighter who turned his career upside down.

I wonder what will go through his mind when he looks across the ring and sees Ruiz before the opening bell in Riyadh. Will he set his sights on his conqueror with steely determination and think with certainty, “That man is in for a rough night.” Or will at least a part of him have doubts.

If that latter is the case, he could be in trouble.

Of course, Joshua and his team will have had a lot of time to determine what went wrong and how to correct it. He said Ruiz and the world will see a better – and hungrier – fighter than the one who was dominated a few months ago.

I won’t be surprised if he’s right. I can see him doing to Ruiz what Lewis did to Rahman, which is to pick up where he left off before the monumental upset. Joshua certainly has the ability to beat anyone, including Ruiz.

I also won’t be surprised if Ruiz beats Joshua again. The new champion underscored in the upset that he’s a good fighter, probably more skillful than Joshua. And he proved during the first meeting that he wasn’t the least bit intimated by Joshua. Ruiz went down from a left hook but got up unfazed. Joshua then landed a hard right hand. No problem. Moments later the then-challenger landed his own left hook that changed the course of the fight. And when he had Joshua hurt in the fight, he demonstrated that he knew how to finish him.

In the end, Ruiz beat up Joshua. In light of that, isn’t reasonable to believe that Ruiz will have a psychological edge when he faces Joshua a second time?

The answer to that question could go a long toward determining what the heavyweight division will look like going forward.

[QUOTE=Tyistall;19978769]Ohhh I get it. Maybe he should have fought the worst guy possible like Fury or Wilder both do, and you would have given him props instead? Wilder is too much of a pu$$y to fight AJ. Even for 120…

[QUOTE=_Rexy_;19977108]We’ve seen him fight before. There’s a reason myself and a small group of posters were saying Joshua as trouble with short guys and will struggle with Ruiz’s hand speed. That’s not going to change.[/QUOTE] True, and that was always…

[QUOTE=pollywog;19978413]The blueprint to beat Ruiz is already out there. Oilskin Parker wrote it! Take him 12 rounds and outbox him...[/QUOTE] AJ doesnt have the stamina or the chin to do what Parker did

If I were Joshua,I'd have taken the immediate rematch.If I'd lost to a real deal,world class fighter,probably not. But I lost to to a guy that is ok,but not genuine world class that I took lightly.Stick and move,keep him at…