IBF, IBO, WBA, WBO heavyweight champion Anthony Joshua is still very much focused on returning to the ring in the UK, according to his promoter Eddie Hearn.

Joshua was scheduled to make a mandatory defense against Kubrat Pulev of Bulgaria.

The British superstar has not fought in the UK since the fall of 2018, when he knocked out Alexander Povetkin. 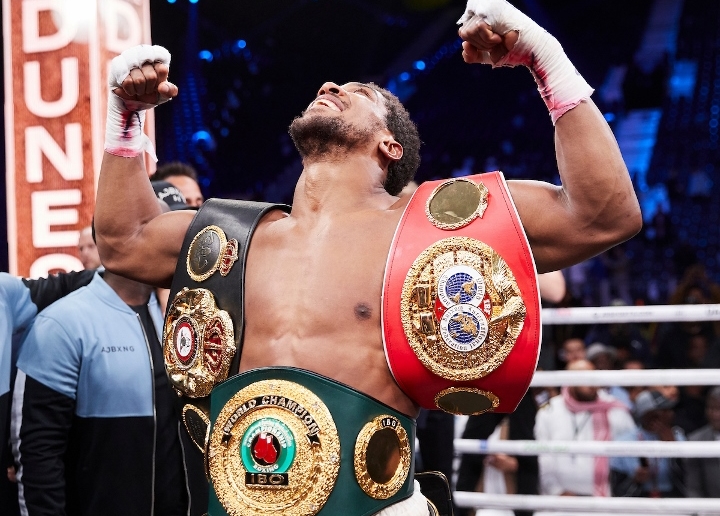 The fight with Pulev was going to take place on June 20th at Tottenham Stadium in London, but it was postponed due to the ongoing coronavirus pandemic.

There was a date of July 25th being kicked around - which is not going to happen at this point, as fans will not be allowed to attend events when boxing returns to the UK in early July.

In the last few weeks, there has been talk of Joshua-Pulev being relocated abroad - with Middle East, China and Croatia being considered.

Joshua is holding out hope that something can be done where he's able to fight on UK soil.

In order to achieve that goal, Hearn does not expect Joshua-Pulev to take place until the late months of the year - like October or November.

"Wouldn't it be great to come through all this and stage a world heavyweight title fight in the UK this year. For us, that is the absolute focus and if that's taken out of our hands, we will look at other options around the world," Hearn told Sky Sports.

"Croatia is a potential option at this stage and just a part of wider discussions. Given the current uncertainty, I would expect to see him in the ring again end of September at the earliest, but more likely October or November as the restrictions hopefully start to ease."

Joshua should focus on being an interior decorator.... Home is where the nerves relax with frenzied homecourt advantage.... How in the world, at this stage in his career, is he still preoccupied with staying in his cocoon?? Lennox should come…

[QUOTE=Marchegiano;20574252]Modello, sometimes Stella That said, what are they for? I really believed that's what they were for. Not boxing directly, but, that kinda cultural bull. It's not like we have a vested interest or anything. I've never before had any…

[QUOTE=Bunch Pag;20574145]I'll have a pint of what you're on dude 😂[/QUOTE] Modello, sometimes Stella That said, what are they for? I really believed that's what they were for. Not boxing directly, but, that kinda cultural bull. It's not like we…

[QUOTE=Marchegiano;20574114]In the UK, why doesn't the royal family take over when cultural aspects of the UK are under worldwide threat? I'm not criticising, I'm American, I really don't understand y'all's system. They are there to preserve culture right? Just being…