HE called himself The Destroyer.

They sniggered behind their hands at his rotund figure.

“Well, look at him. He’s not championship material.”

Alas, this is not bodybuilding. This is fighting. This is boxing, a sport where shapes and sizes often count for nought but talent and heart means everything.

People laughed at Ruiz Jr and now boxing’s moneymen laugh no longer as he cooked the sport’s heavyweight golden goose. The Destroyer turned out to be the live landmine that obliterated a couple of the sport’s megafights, certainly knocking a zero or two off their overall worth.

They say that only in defeat does a true champion reveal himself and now we will get to see what Anthony Joshua is all about, what drives him and what he wants out of this sport.

He certainly didn’t foresee his Madison Square Garden loss to unheralded Andy Ruiz Jr and the world according to the deposed champion today is very different to the world he woke up to on Saturday morning.

The A-side? He can command that in superfights no longer.

A fickle few have suggested retirement. Some say it’s back to the drawing board. Some cannot see anything happening differently should he face Ruiz again, while others are desperate for a UK rematch in November or December.

Before all of that, one could contend that he needs to relight an internal fire for competition. 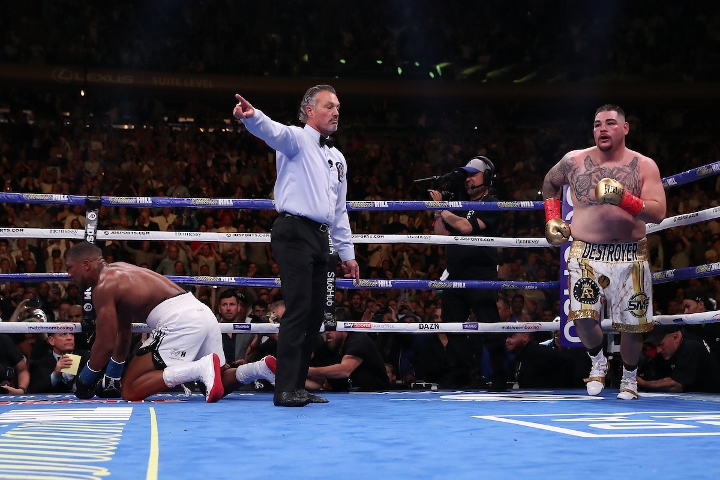 He’d admitted he’d struggled in the build-up. He’d hired a sports psychologist to prevent him from listing between lacklustre defences.

Life had been good for Joshua, one of the most famous men in the United Kingdom.

But is that what you need as a boxer?

It’s well worn, that required characteristics include hunger, desire and ambition. What you don’t need, as Marvin Hagler so concisely and articulately put it, is complacency. “It’s tough to get out of bed to do roadwork at 5am when you’ve been sleeping in silk pyjamas,” said the middleweight legend.

But the face of a thousand products seems to have become sanitised, groomed into a consumable, not a fighter. He’s become a model, a statesman, a celebrity, a brand. But when the questions were asked again last night, Joshua as a fighter had no answer.

That is not to say he cannot, Rocky-like, find that eye of the tiger again. Nor is it to say it’s not been there before, as he’s shown his heart multiple times, whether cut, dropped or hurt.

But it implies that the grit may have been manicured out of him. He wouldn’t be the first. And with the world and its wife anticipating a victory parade, a supposedly straightforward launch into the US commercial sector, who’s to say Joshua was merely paying lip service to the things that fighters say and do in fight week, going through the motions.

Perhaps that’s it with Joshua. There seems to be a lot of autopilot, freewheeling, be it in the ring or out.

He’s become commercialised and branded to a Joe Louis-like extent.

The great Louis was given seven commandments by representative John Roxborough going through the 1930s and 1940s, as he tried to protect himself and those close to him from racial prejudice. He was never to have his picture taken with a white woman, never to go to a nightclub alone, not to take any soft fights, not be involved in any fixed contests, never to gloat over a fallen foe, to remain expressionless in front of cameras and to live and fight clean.

There is, of course, nothing wrong with that as a directive – a slick PR machine’s dream, but a fighter? At least Joe would have burned with an inner resentment at the hand he was forced to play – but in the translation of this mission statement have we lost the real Joshua? Have we lost the fighter? Have we lost the man, the boxer, a nation fell in love with?

There’s no question it’s in him to show it all again but there are so many layers to Team Joshua that you have to strip away so much you don’t know if you will see the real Joshua re-emerge.

A fight week photo of Team Joshua gathered a pace in the build up with a team of around 25 people around him. While he might have been flying with out-of-the-ring endorsements the brand has come about because of his boxing and with a seemingly far higher ratio of business to boxing people in the Joshua business maybe the attention must be switched to the bread and butter rather than the accessories that come with it. But that will depend on his wants and needs moving forwards.

A Roger Federer, a Tiger Woods, they don’t need that horrible bit of nastiness a fighter thrives on, the kind of spite that separates the hungry from the content. It’s one thing wanting it, which Joshua still might, it’s another thing needing it, which he might not.

Has he been softened by family life, money and the businessmen around him? Has he become too civilised for this violent business?

We have seen proud champions not let their opponents get a sniff of a belt in fight week, yet Joshua politely handed to them for Ruiz to display at the pre-fight presser. It was hinted that Joshua may have been disarmed by his nice guy demeanour, that the fear factor was non-existent – a dangerous absentee in a dangerous game.

But does saying AJ’s taken his eye off the ball only serve to detract from and diminish Ruiz’s Herculean achievement?

Let’s not forget about the man of the moment, while trying to piece together what’s happened.

Some on the other side of boxing’s promotional divides will be revelling in Joshua’s loss but it benefits almost no one. Cynical British fight fans will say beaten and beltless former champion was always more Bruno than Lewis but it is certainly not great for the sport, even if the immediate shakedown and subsequent shake up may prove more exciting than the tedious wait of the three who weren’t fighting merry-go-round.

But a huge, towering and iconic figurehead for boxing helps everyone, from the pinnacle to the base, by creating interest and momentum at all levels.

The hate-mongers will want to read about how Joshua quit and how he was exposed, how Tyson Fury was always a better boxer and would have outboxed him and how Deontay Wilder was a bigger puncher and would have outpunched him. But we have seen what happens when people know it all, as we thought we did going into Saturday night. The ball is in Joshua’s court to prove us wrong now. And this is where the true champions show what they are all about and what is deep within them.

Would the Joshua who spectacularly poleaxed Wladimir Klitschko in 2017 have been so visibly nonplussed by the outcome? It’s what we can’t see that will give him the answers. It is how he feels about the defeat that will or will not drive him forwards. Will he lust for vengeance? Will he want to grit his teeth and step back into the fire? Will he become depressed, be embarrassed and retreat? He’s likely to experience all of the above during a tormenting month-or-so long roller coaster, but when the answer to a question is that you don’t need to box because you’re financially set with generational wealth it is an inherent game changer that it doesn’t matter how you feel, if you live life with such a safety net then what drives you? That’s not to say he cannot be driven once more, but he needs his why, his purpose. Why does he want to do it? Why does he want to fight on? Why does he want to risk more against the likes of Wilder and Fury?
And through it all on Saturday night, you had a polar opposite figure who was not the face of one product let alone a thousand, who was not a body beautiful, who was not a poster boy and who wasn’t even supposed to be in there.

He was supposed to be a blubbery also-ran but he shook up the world and then shouted to his mother, “Mom, our lives are going to change now. No more struggling.”

It is that kind of human interest that was lacking from the other side of the ring because over the course of the last few years we have not been shown who the real Joshua is. Ruiz was a very real man, afterwards, and who wasn’t moved by that line?

He knew his why. He knew what drove him. And that is one of the reasons why so many were so happy to witness his personal glory.

[QUOTE=dwayne3534;19799034]Who said that cant see anything happening different? He literally just got caught with a great punch while rushing in. He certainly wont lose the 2nd fight with Ruiz. This is Rahman knocking out Lennox Lewis man[/QUOTE] Rahman put out…

AJ QUIT! He did not want anymore of that man. Just standing there in his corner not walking out to the Ref as instructed. HE QUIT! "Thanks for the fight John, just don't HIT me no mo! Standing in the…

[QUOTE=angkag;19799194]If you rewatch the first couple of rounds again, there was nothing comfortable about it for Joshua. Before Ruiz got decked, Ruiz was relatively inactive going forward, but so was Joshua. I think most people (not all) gave Joshua the…

[QUOTE=Ajvar;19801299]And Larry Merchant appeared to be so wrong. At least he got payed there unlike you so skip people reading your foolishness.[/QUOTE] Larry wasn't wrong that night. Wlad got completely unwound by Sanders that night; then it all happened again…

[QUOTE=NachoMan;19800233]He already was Wlad 2.0. That's exactly what you saw on Saturday. [INDENT]"...[I]and the next big thing is about to become the last big bust[/I]..." -Larry Merchant[/INDENT][/QUOTE] And Larry Merchant appeared to be so wrong. At least he got payed…