Anthony Joshua: Eric Molina Will Be Toughest Fight of My Career

Anthony Joshua finally has an opponent for December 10.

The bout will take place at the Manchester Arena in Manchester, England. Showtime will broadcast the fight live. 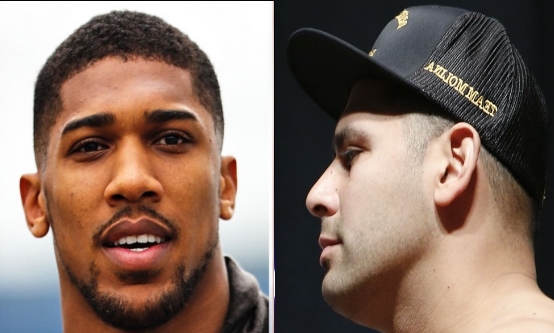 Joshua (17-0, 17 KOs) will be making the second defense of the title he won from Charles Martin on April 9. In his first title defense, the 2012 Super Heavyweight Gold Medalist dominated contender Dominic Breazeale before stopping him in the Seventh round on June 25.

“I am pleased that everything is now set for December 10 and I can concentrate on getting the business done in the ring,” said Joshua. “There has been plenty of talk about who I may face but all I'm doing is concentrating on finishing Molina in style and putting on a great show.

“Every fight is dangerous in this division and this is no exception. I saw Molina have a great fight with Wilder and he is now coming off a strong KO win against Adamek in Poland.

“I'm expecting this to be the toughest fight of my career so far and I will be ready for an all-out war.”

Wladimir Klitschko had been mentioned as a possible opponent for the 27-year-old Joshua. There were numerous dates this year where Klitschko was scheduled to fight Tyson Fury, but they were postponed due to Fury’s troubles outside of the ring.

There were ongoing discussions between Matchroom Boxing, which promotes Joshua, and K2 Promotions, which promotes Klitschko. The fight was scrapped when Klitschko announced last week that he suffered a ‘minor injury’ during training camp.

Molina (25-3, 19 KOs) was unsuccessful in his only attempt at a world title belt, losing by knockout in the ninth round at the hands of WBC titleholder Deontay Wilder.

In his last bout on April 2, Molina, who is a special education teacher at a high school in Edinburg, Texas, scored a knockout victory over Tomasz Adamek in the 10th round. Molina was down 88-83 on all three judges’ scorecards at the time of the knockout.

The fight will top a strong Matchroom Boxing card.

Matchroom Boxing also announced heavyweight contender Luis Ortiz will appear on the card. Ortiz is scheduled to fight November 12 against Malik Scott.
Amateur standout and 2012 Gold Medalist Katie Taylor is penciled to fight on the card as well.

They tried for Klitschko, which most of the biggest whiners on here were happy with but that fight wasn't made because of Vlad. Even if Joshua had fought Vlad and starched him, people would be complaining about how shot Vlad…

This is only half the news! The WBA has sanctioned AJ v Wlad for 2017! Keep busy fight for AJ!

That it's on PPV/Box office is the joke here. Regardless of circumstances and events leading up to who AJ can fight, Hearn is really taking the p1$$ with box office for that headline fight. Chisora - Whyte should be awesome…

I don't mind, stay busy fight for Bibical while Wlad takes care of his calf! Bibical can work on his jab in this fight and his defense as well!

[quote=punchypotorff;17164122]quote: Originally posted by punchypotorff view post unless joshua destroys molina in less rounds than wilder did, while getting buzzed hard along the way. Off your meds again troll son? Go watch whyte's last fight. Much improved. Type less, learn…