Anthony Joshua: Andy Ruiz is Championship Level For Sure

Anthony Joshua has insisted that he hasn’t underestimated Andy Ruiz Jr. “one bit” ahead of their unified Heavyweight World title clash at Madison Square Garden in New York on Saturday June 1, shown live on DAZN in the US and Sky Sports Box Office in the UK.

The California-based Mexican is in his second World title tilt having pushed former WBO Heavyweight ruler Joseph Parker to the limit in the Kiwi’s hometown in December 2016, being edged out by the finest of margins via a majority decision.

Ruiz has another golden opportunity to create history by becoming the first ever Mexican Heavyweight World Champion in the Big Apple next week and the ‘Destroyer’ has warned IBF, WBA, WBO and IBO champ ‘AJ’ to under-estimate him at his peril. 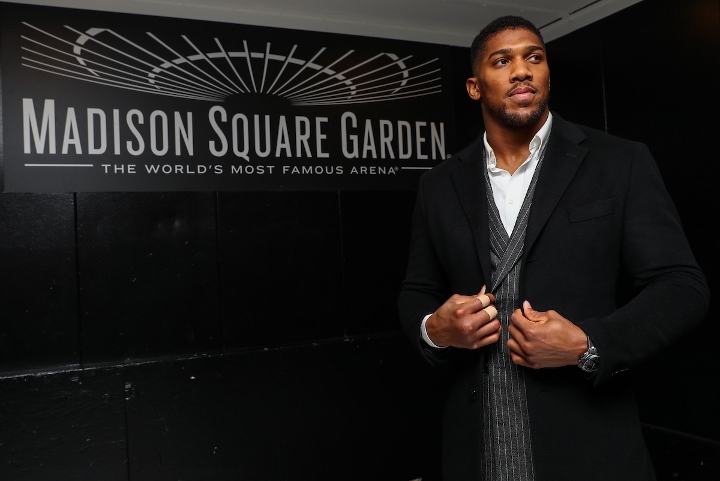 Joshua heads into his highly-anticipated US debut as a heavy favourite with many bookies but the British sensation says he is all too aware of the threats posed by his latest challenger, who he feels is deserving of a second World title shot after stepping up to the plate when others shied-away.

“It's not about what you look like, it's a craft, a skill, and what's in your heart and your head matters in the end,” said Joshua. “Andy has shown he has all that, he can fight and box, that’s what matters. I think Andy is a great challenger and will bring it on June 1.

“All I’ve heard is ‘AJ will smash him in a round’. From the outside they think that anyone can box, so how is the guy that doesn't look like a fighter able to box? I always say that if you put ten bodybuilders in the ring, not one of them could fight for a regional title in boxing.

“Take me out of my body but keep the same attributes and height, same jab, same chin, same heart and same mind, but I looked different – I'd still get to the same position I am in because it's what is within you that makes a champion, your genetics, and his genetics are the same - and he took the fight!

“He's keen, he's game and you cannot knock him. He can fight and he's got hands. He gave a World Champion in Joseph Parker lots of problems, and when you look at the fight the Parker gave Whyte when people are saying Whyte can beat Wilder, Fury and me, Andy is championship level for sure, and I have not underestimated him one bit.”

Joshua and Ruiz clash on a huge night of action at MSG with Irish sensation Katie Taylor clashing with Delfine Persoon for the undisputed Women’s World Lightweight championship, New Yorker Chris Algieri defending his WBO International title against Tommy Coyle is a crunch Super-Lightweight showdown and Josh Kelly making his US debut as he defends his WBA International Welterweight title against Philadelphia’s Ray Robinson – with more exciting undercard additions announced this week.

Joshua wasn't kidding. Just look at Tyson Fury, he is also fat. Speed kills, and Joshua is too slow against Ruiz who has both power and speed in his hands. All that fat also probably cushions shots on his body…

So Haymon and Hearn can make this fight happen on short notice without any issues or drama or blaming the networks. Yet as soon as wilder and AJ names are mentioned to fight each other all of a sudden these…

Ruiz is too easy to hit. His last opponent landed some good shots on him before being stopped. Imagine what AJ is going to do when he lands a power shot on him.