Anthony Fowler Puts Down Kalilou Dembele in Fifth Round

Fowler dropped the Frenchman with a short left hook in the second and hammered Dembele to the body with crunching rib shots. Several times the brave visitor blew a stream of blood from his nose, before the finish at the start of the fifth as amateur star Fowler landed a lovely right uppercut to end the fight.

It was Dembele’s first bout outside French soil, while the busy Fowler is scheduled to be out again next month on home soil on the bill headlined by Amir Khan. ’The Machine’ suggested afterwards that the KO was premature but a blessing in disguise for the visitor. 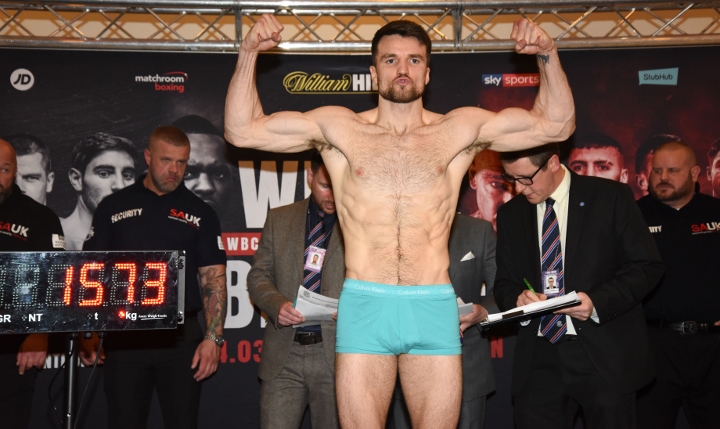 Also on the card, Dereck Chisora, who had been in negotiations for a possible crossroads match on the Haye vs Bellew bill with Joe Joyce warmed up here with a second round knockout over Frenchman Zakaria Azzouzi.

It was Chisora’s first fight since a disappointing performance against Agit Kaybabel for the EBU title in Monaco last November and he shed the rust in the first round before landing a huge right hook to end the fight in the second.

Azzouzi has a good record on the face of it but was a cruiserweight until he returned to the sport after a four year break last year.

Afterwards, Chisora confronted Joyce promoter and former opponent David Haye and said he’d fight Joyce for Haye’s purse for the Bellew rematch if Chisora were to win and a nominal £1 if Joyce were to win.

Was pretty clear, that they wanted to give Fowler a knockout win. The french guy was pretty tough and was able to take the shots to the body. Fowler has decent bodypunches, but his offense upstairs isnt tight enough. Relies…

Premature stoppage but one way traffic