Angel Garcia: Thurman Ain't The Same Since He Fought Danny

LAS VEGAS – Angel Garcia doesn’t see the same fighter that beat his son when he looks at Keith Thurman these days.

Danny Garcia’s father/trainer is convinced that the former WBC welterweight champion took so much out of Thurman physically that he’ll never be the same. Thurman has acknowledged the toll their 12-round, 147-pound title bout in March 2017 took on him.

It led to Thurman getting surgery to repair his right elbow the following month.

“Danny put an icing on him, man,” Angel Garcia told a group of reporters at MGM Grand on Thursday. “He ain’t the same. Man, you can see it in his camp, bro. He’s slapping and all this sh*t. He’s not turning them shots.” 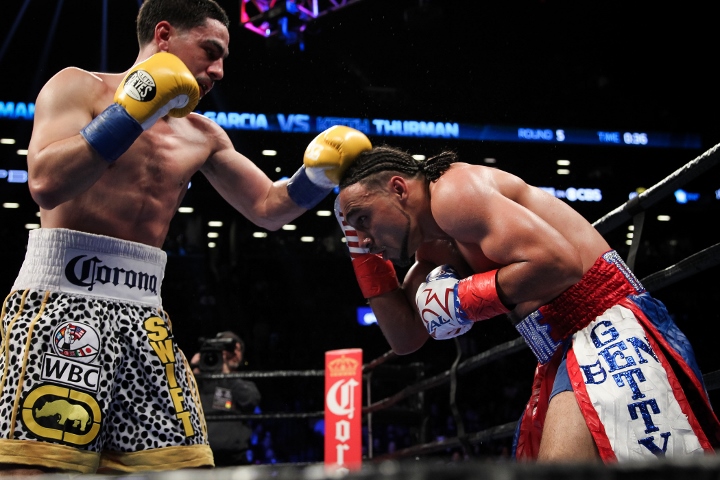 The 30-year-old Thurman has fought just once since he defeated Philadelphia’s Garcia (35-2, 21 KOs) by split decision in their welterweight title unification fight at Barclays Center in Brooklyn.

When Thurman finally returned to the ring January 26, he understandably appeared rusty. Josesito Lopez (36-8, 19 KOs, 1 NC), a huge underdog, hurt Thurman badly during the seventh round of that fight at Barclays Center.

Angel Garcia does give credit Thurman for beating Danny Garcia.

[QUOTE=JcLazyX210;19915140]Tell Danny to fight Crawford.[/QUOTE]Check out this video Angel just did one day ago and this will tell you all you need to know about how he feels about a potential Bud/Danny fight! [url]https://www.youtube.com/watch?v=wqff759dozM[/url]

For some reason I like Angel Garcia and his honesty and his professionalism. But now he got it wrong, Thurman will win an ugly disputed desicion.

Too many wars may shorten career but come on now. One tough fight with Garcia and he's shop worn? One tough fight don't make you past prime. It makes you battle tested and proven. He's 10 years younger and not…