Angel Garcia: There's No Way Rios Is An Easy Fight for Danny

However you view it, Danny Garcia’s father/trainer emphasized Friday that they don’t expect his 12-round welterweight fight against Rios to amount to an easy night of work. Garcia (33-1, 19 KOs) is a 20-1 favorite over Rios (34-3-1, 25 KOs) in advance of their February 17 fight at Mandalay Bay Events Center in Las Vegas. 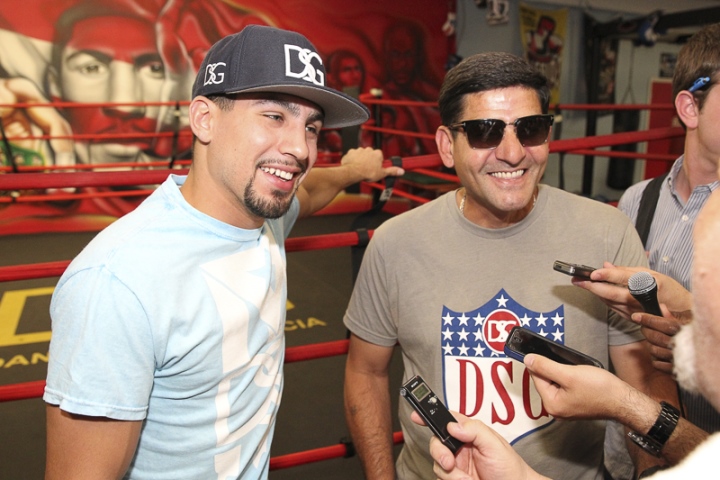 If nothing else, the 31-year-old Rios clearly has trained better for their fight than he did for his ninth-round technical knockout loss to Bradley in November 2015. Rios came to training camp very heavy before boxing Bradley, who made Rios pay for preparing poorly by beating him up on his way to a stoppage in Las Vegas.

Rios, 31, has fought just once since Bradley battered him. He knocked out Mexico’s Aaron Herrera (33-8-1, 22 KOs) in the seventh round of that June 11 bout in Lancaster, California.

Garcia, 29, will end an even longer layoff when he squares off with Rios. The Philadelphia native hasn’t boxed since Keith Thurman beat him by split decision in their 12-round, 147-pound title unification fight March 4 at Barclays Center in Brooklyn.

“Danny knows he can’t take anything lightly because Brandon Rios will be prepared,” Angel Garcia said. “But he’s not going to win. Danny Garcia has never taken a beating; he gives them out.

“Brandon Rios better keep his hands up. We’ll be ready in one week for Danny Garcia to be at his best. You’re gonna see him once again show his great skills.”

Showtime is set to televise the Garcia-Rios fight as the main event of a tripleheader.

In the opener of the three-bout broadcast, Cuba’s Yordenis Ugas (20-3, 9 KOs) will face Philadelphia’s Ray Robinson (24-2, 12 KOs) in a 12-round IBF welterweight elimination match. In the co-featured fight, Phoenix’s David Benavidez (19-0, 17 KOs) and Las Vegas’ Ronald Gavril (18-2, 14 KOs) will meet in a 12-round rematch for Benavidez’s WBC super middleweight title.

Chuckle. I remember when Pacquiao coming off a devastating loss and fought Rios. Was a garbage fight says Angel and others. That was five years ago. Rios is even more garbage now.

Just reading the article title and I’m like “ What the ......”. Not the best way to sell a mis-match fight and you’re not selling your sons brand in a favorable light either. Way to go Angel!!!

Danny is gonna beat the hell out of rios. He will catch rios all night and stop him in the middle rounds. Danny is a much better boxer, rios is shot, this is tailored made for Danny to look like…

Oh they know they in over their head. Why you think they were gonna pull out of the fight if they couldnt add in a rematch clause? Rios is gonna stop Danny Garcia!