Angel Garcia is certain Errol Spence Jr. hasn’t been hit the way his son will drill Spence on December 5.

“If Danny throws a straight right and hits him flush, Spence isn’t getting up,” Angel Garcia said Monday during a virtual workout to promote their fight. “Spence hasn’t really been hit yet. I respect every fighter, but Spence has only really fought three guys that people know. Just look at all the fighters Danny has fought. That resume matters.” 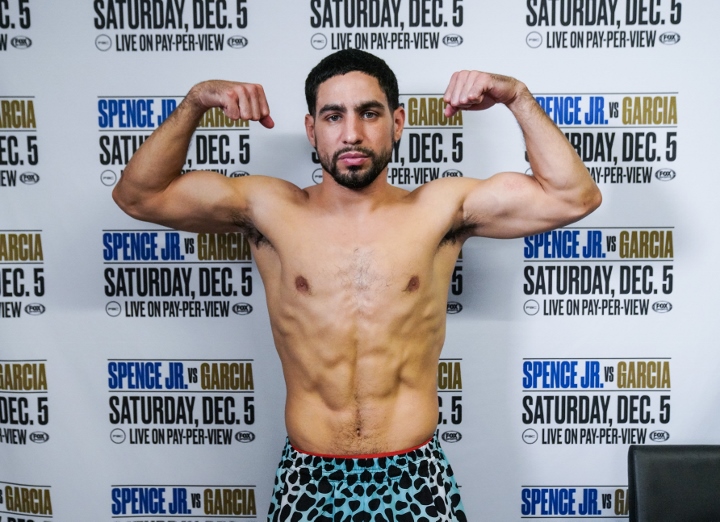 Porter defeated Danny Garcia by unanimous decision in their 12-rounder to win the then-vacant WBC welterweight crown in September 2018 at Barclays Center in Brooklyn. Garcia topped Peterson by majority decision in a very competitive 12-round, non-title fight that was contested at a catch weight of 143 pounds in April 2015 at Barclays Center.

Spence edged Porter by split decision in his last fight, a 12-round, 147-pound title unification fight in September 2019 at Staples Center in Los Angeles.

The 30-year-old Spence previously knocked out England’s Brook in the 11th round to win the IBF belt in May 2017. The DeSoto, Texas, native stopped Peterson in the seventh round of his first title defense seven months later at Barclays Center.

Spence will fight for the first time since sustaining cuts to his face and body, as well as dental damage, in a one-car accident 13 months ago in Dallas.

“What really matters is that once Danny lands his shots, will Spence be able to handle it?,” Angel Garcia said. “I’m not worried about anything else that’s being said on the outside.”

Odds-makers have inserted Spence (26-0, 21 KOs) as a 4-1 favorite to successfully defend his IBF and WBC belts against Garcia (36-2, 21 KOs) in the main event of a FOX Sports Pay-Per-View show that’ll take place at AT&T Stadium in Arlington, Texas. Neither Danny Garcia nor Angel Garcia have paid much mind to how handicappers have assessed their 12-round championship match.

“Danny has always been the underdog,” Angel Garcia said. “Whether it was Amir Khan or Lucas Matthysse, it doesn’t matter. He’s only the underdog because Spence is undefeated, but that doesn’t mean anything when we get in the ring.”

Lol lost every round.

Danny is more than capable of pulling the upsets, not sure why people act like he didn't give Thurman and Porter tough fights. Also Danny gets up for Big Fights and brings his best. Should be a good fight!

Nah Spence has a chin as do most pressure fighters