Andy Vences Very Confident: Erik De Leon is Not on My Level!

On March 10th, Andy Vences (20-0) will face Erik De Leon (17-0) in what will be the biggest fight in both of their young careers.  The two lightweights will battle in the co-feature bout underneath the Oscar Valdez-Scott Quigg main event. Both fights will be televised by ESPN as part of Top Rank's exclusive output deal with the network.

According to Vences, the fight is a long time in the making.

"We were trying to make this fight happen like two fights ago so if anything I was just waiting on him to make a decision agree. Once the fight got finalized I was already training. Everything has been smooth in camp training for a southpaw and the movements. I am ready to go," he explained. 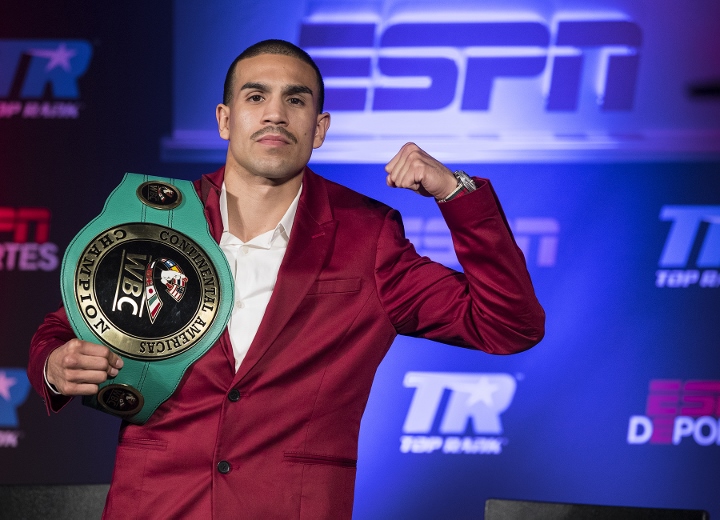 The 26-year-old Vences knows that a breakout performance in front of a national audience can lead to a lot of opportunities and he plans on taking full advantage.

"I am very excited about it. Especially on being on Oscar Valdez's undercard. I have had the honor to share the ring with him. We have done many rounds in sparring before. Being on ESPN, they moved us to co-main event. It is huge. In boxing if you aren't fighting anyone then you won't become anybody. I feel like this is a fight I know I am going to win confidence wise, it is just a matter of how I am going to win," Vences told BoxingScene.com.

While he respects his opponent, Vences doesn't believe that De Leon is on his level.  He feels that when he stepped up his competition that the knockouts and vaunted power he became known for started to disappear.

Both fighters are unbeaten but De Leon went the distance in his last fight while Vences has stopped two opponents in a row. Vences has also gone more than 8 rounds twice while De Leon hasn't seen the 7th round in a fight. He believes that his experience will be a key factor in coming out of the fight with his hand raised.

"De Leon has been on a roll but he wasn't fighting anybody. I feel like as soon as they stepped him up in his last fight he went 6 rounds for an unanimous decision. He has been scheduled for 8 rounds but we have never been past 5-6 rounds. He is explosive and aggressive and hits hard and I give him credit for what he does but I don't feel like he is on my level. He is aggressive and has a lot of power and comes forward but I don't see him having a second or third gear. It is going to be interesting," said the Northern California native.

"I think the advantage that I have going into the fight is that I know how it felt when I fought my first undefeated fighter which was Casey Ramos. Training wise I think I trained a little too much. I did things a little overboard knowing that title was on the line. I did things to the extreme where I felt it affected my performance but luckily I came out with the win and I learned a lot from that fight. I feel like now nothing is going to change. The only thing that is going to change is my sparring but now I won't be overdoing things or trying to make it seem too big for what it is."