Andy Vences: I'm Gonna Show Why I Deserve and Need My Shot

Andy Vences has a question.

“Have you ever heard of PCE?” asked the junior lightweight contender, who faces Albert Bell on the Tyson Fury-Tom Schwarz undercard in Las Vegas this weekend. “An older friend of mine, he’s 71 years old, he was telling me about it and I translated it so I fight this way. PCE – Prevent. Control. Eliminate.”

I like it. So does Vences, who wrote the three letters down on a piece of paper that he stuck to a mirror to remind him what he needs to do when the gloves are on and the mouthpiece is in.

That fighting philosophy has led the 28-year-old from San Jose to 22 wins in 23 pro bouts, with the only blemish a 2018 draw with Erick De Leon, and he believes that with a win over fellow unbeaten Bell, his next step will be a world title shot.

“Big time,” he said. “I feel that after this performance, that’s it. I’m gonna be 23-0 (with one draw) and what I’m gonna show is gonna be another reason why I deserve and need my shot.”

It’s almost a cardinal sin for a fighter to talk about the next fight before this one is in the bank, and with a 14-0 with 1 NC record, Ohio’s Bell is no pushover. But Vences doesn’t have a confidence problem or a problem talking about his future, and the reason why goes back to what he does in the gym with trainer Angel Cordon Sr.

“I’ve always been a fighter that’s been able to juggle so many things in my life, whether it was problems, financial issues, issues at home, even from growing up when I was younger and starting this professional career,” he said. “So the future plans are not really me focusing on it; it’s a matter of me getting it done. All the hard work and everything I’ve done in the gym for this fight, it’s already done, so I actually feel very relaxed as far as talking about things because I’m not worried about June 8th. I know I did my training, I know I did my camp, I did the right nutrition and I did everything possible to win. I was a hundred percent dedicated. And for me, dedication means all-out sacrifice, and that’s exactly what I did leading up to his fight. So I really have no worries. I can talk about anything and not be distracted because I know how to take things step by step.” 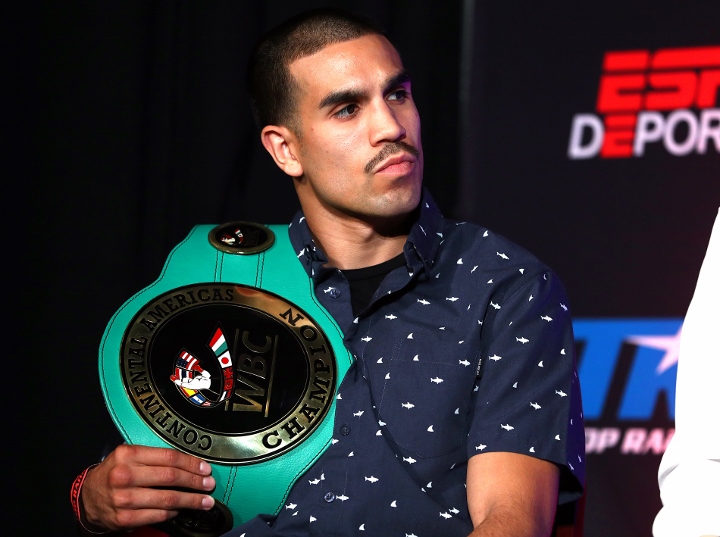 Well, since he put it that way, if he does beat Bell and gets his wish to challenge for a title in a crowded 130-pound division, he doesn’t hesitate when asked who he has his sights set on.

“I’d really like to fight Jamel Herring,” Vences said of the newly crowned WBO champion. “I saw his performance on ESPN against (Masayuki) Ito (on May 25) and I really want that fight. That’s somebody that I’ve always wanted to fight, someone who’s always been around that I’ve wanted to step in the ring with, and now that he’s a world champion and has that WBO title, I would really want to fight him first, then unify with (Miguel) Berchelt for the WBC. He’s just a target on my list that I’ve always wanted to fight. I feel his family deserves the belt, but I don’t feel that him, as a fighter, belongs on that level.”

Those are fighting words, and with both Vences and Herring promoted by Top Rank, it’s a fight that could easily be made, right?

“A lot of people say it’s easy, but I’ve been asking for that fight with Jamel,” said Vences. “I wanted to get that fight before he won a world title, so whoever won a fight between us would fight for something. But it didn’t happen for various reasons.”

Which means now it’s Bell for Vences, and “El Tiburon” is well aware that if he doesn’t get the job done in Las Vegas, talk of world title shots will be put on the backburner. So his undivided attention is on Mr. Bell.

“He’s a guy who’s undefeated, but he’s a guy who hasn’t fought anybody at my level,” said Vences. “So realistically, I came up with a game plan with my trainer for this fight, it’s going to happen exactly how we planned, and I just can’t…”

He appears to be going in the direction of “I just can’t possibly see losing,” but he pauses instead to gather his thoughts…then goes in that direction anyway.

“When the fight first got announced, I was thinking, he’s tall, he’s this, he’s that. But when I started sparring, the sparring partners that were heavier than me and taller than me and the way I’ve been looking, there’s no doubt in my mind that I’m gonna beat him. If I can’t beat Albert Bell, I really don’t belong in a world title fight.

“Albert’s never taken that step to that next level, and I feel it’s gonna show,” Vences continues. “The first couple rounds might be competitive, but as soon as he gets hurt, it’s gonna be a change of plans. Like Mike Tyson said, ‘Everybody’s got a plan until they get punched in the face.’”

Andy Vences is a confident young man. He won’t deny it, either. But it’s more matter of fact than boastful. And he means every word that comes out of his mouth.

“You’ve got to feel it, and I feel what I say,” he said. “I feel it happening and I visualize it already.”

PCE, right? Yes, but he’s got another one before we go. He calls it the Five Cs.

“Cool, calm, collected, controlled and cash in,” said Vences, ready for it all.

Another boy named Andy with the same dream as Snickersman amigo!