Andy Ruiz: After Joshua, I Want Wilder or Fury Unification

On December 7th, Ruiz will face Anthony Joshua in a rematch in Saudi Arabia.

Back on June 1, Ruiz dropped Joshua four times to capture his unified crown in the seventh round, before a shocked Madison Square Garden crowd in New York City. 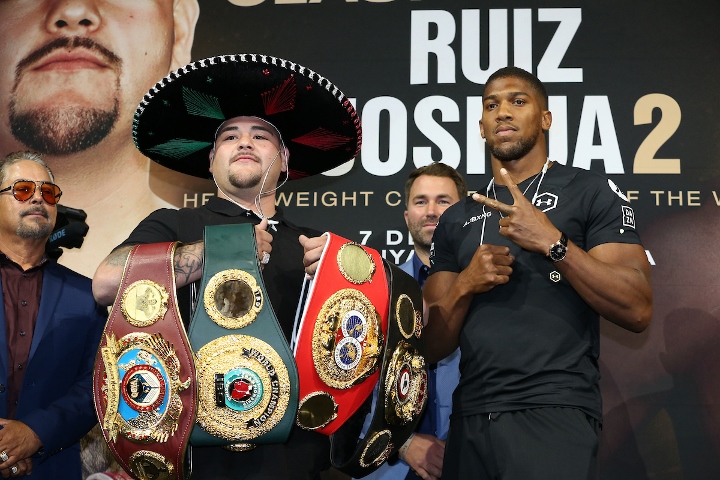 Should he beat Joshua for a second time, there is one more world title remaining - the WBC championship currently owned by Deontay Wilder.

Wilder is scheduled to face Luis Ortiz in a rematch in November. He previously stopped Ortiz in eleven rounds back in March of 2018.

Should Wilder win, he would then take part in a rematch with Tyson Fury in February of next year.

Ruiz wants the winner of the contest.

A fight with Wilder would be a lot easier to make, because both boxers are competing under the Premier Boxing Champions banner. Fury is handled by rival promoters Top Rank and Frank Warren.

"Of course, I'm just missing one belt," said Ruiz to Sky Sports. "One belt to be the undisputed heavyweight champion of the world and that's the goal, but I don't want to look past Anthony Joshua.

"I want to defeat him one more time, because there's a lot of critics saying that it's a lucky shot, that I'm going to lose. I'm using all the negative energy to positive energy, so we're going to win.

"I don't want to look past Anthony Joshua. My eyes are on the prize with him, so after I win that fight, then I can fight Deontay Wilder or Tyson Fury. [Me and Wilder are] in the same team, so I think it will be good."

[QUOTE=Oldskoolg;20072705]Please excuse my young countrymen, they became fans of the sport because of Eddie Hearn.[/QUOTE] I used to box myself, I have been following the sport for almost 40 years. Don't make any apologies for me, or think you may…

[QUOTE=Drewp4p;20073027]It would be a good entertaining stay busy fight for andy while he waits for the winner of fury wilder 2.[/QUOTE] Kownacki is too much of a live stock for a stay-busy fight... When Ruiz is done with Joshua, he'll…

The WBO belt will be the hardest to keep

[QUOTE=Pigeons;20073458]If Ruiz beats Joshua again, the IBF (Pulev, Top Rank - ESPN) and the WBO (Usyk, Matchroom - DAZN) will immediately call mandatories and I don't see him taking either one. So he'll have one belt at that point. If…