Will Andy Ruiz End Up Like Buster Douglas, McCall and Rahman?

Andy Ruiz made history when he knocked out then-unbeaten Anthony Joshua to win the majority of heavyweight titles in June but his place in history is far from settled. That will depend on what the Mexican-American does going forward, starting with his performance in the rematch with Joshua on December 7 in Diriyah, Saudi Arabia.

Will he suffer the fate of fellow heavyweights Buster Douglas, Oliver McCall and Hasim Rahman – each of whom scored monumental upsets only to quickly fizzle – or will he chart his own course?

First, a look back …

Douglas was a talented, but inconsistent heavyweight when he agreed to face the seemingly unbeatable Mike Tyson on February 11, 1990 in Tokyo. He was a 42-1 underdog, meaning he had next to no chance of upsetting Iron Mike. And then he did.

Motivated by the recent death of his mother and the opportunity at hand, Douglas put it all together that unforgettable night to outbox and ultimately outslug Tyson en route to a surrealistic 10th-round knockout that gave him the undisputed heavyweight championship and a coveted place in boxing lore.

In his next bout, in which he came in 14½ pounds heavier than he was against Tyson, the seemingly unmotivated, unfocused new champ was annihilated by an inspired Evander Holyfield in two-plus rounds. It was as if he said, “I got what I came for – the upset of Tyson – and I’m cashing in my chips.”

The value of those chips? Douglas earned a reported $24 million against Holyfield.

McCall and Rahman knocked out the much-more-talented Lennox Lewis in 1994 and 2001, respectively. Each landed one enormous blow to Lewis’ exposed chin – McCall in the second round, Rahman in the fifth – and in each instance the future Hall of Famer was unable to continue.

Lewis avenged both setbacks with emphatic knockouts – McCall in the fifth round, Rahman in the fourth – and the two one-day wonders went back to being pretty good heavyweights at best. 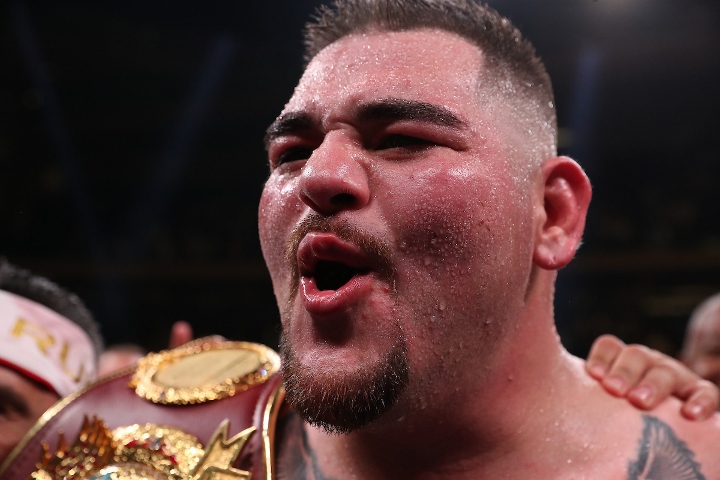 Is Ruiz another Douglas or McCall or Rahman or a combination of all three?

Of course, Joshua, who is bigger and stronger than Ruiz, could land one or two of his formidable power shots – as he did when he put Ruiz down in the third round – but this time finish the job to regain his titles and his place among heavyweights. No one will be surprised if Ruiz finishes the fight on his back.

But I don’t think that’s as likely to happen as it was in the cases of Douglas, McCall and Rahman.

Again, Douglas was a good fighter when he was at his best but he was at his best only intermittently. Ruiz has not had ups and downs in his decade-long career. He’s always prepared for his fights – in spite of excess weight that might suggest otherwise – and seems to be steady in terms of his temperament.

Ruiz’s only setback was a close, majority decision against then-WBO titleholder Joseph Parker in Kiwi’s backyard of Auckland in 2016.

McCall obviously had emotional issues in spite of his modest success – he inexplicably cried after losing to Lewis – and was arrested on drug and other charges, but that probably doesn’t explain his loss to Lewis in the rematch or that of Rahman. More likely, it was just a matter of Lewis being far more talented than either of them and focused the second time around.

Is Joshua significantly more talented than Ruiz? I’m not convinced of that. Ruiz is a boxer through and through, one who took up the sport as a child and had a substantial amateur career before turning pro in 2009. He has always been known as a good, quick-handed boxer with good punching power while Joshua is a solid boxer at best who has relied more on his size and punching power. In other words, Ruiz vs. Joshua is a better matchup on paper than we realized before their first fight.

Another difference between Ruiz and the duo of McCall and Rahman is that he didn’t simply land one mammoth punch to end the fight. Ruiz did initiate Joshua’s downfall with a hard left to the side of the big man’s head later in the third round, a blow from which he never seemed to recover. However, unlike Lewis, Joshua was able to continue and went down three more times before the referee finally stopped the fight to protect Joshua.

One must at least wonder whether that ignominious fate still weighs heavily on Joshua’s mind and gives Ruiz a psychological advantage going into the rematch.

In the end, I think it’s difficult to make a prediction in this fight. I can see Joshua turning the tables on Ruiz if he can overcome the psychological damage he suffered in the first fight. I can see Ruiz picking up where he left off and knocking out Joshua again, thus proving that the upset was no fluke. And I can see a close, give-and-take fight that comes down to the championship rounds, which probably is the most likely scenario.

It’s also difficult to predict what might happen after the rematch, meaning it doesn’t make sense to saddle either fighter with any particular destiny regardless of what happens in Diriyah. For example, Ruiz won’t necessarily end up like Douglas, McCall or Rahman even if Joshua knocks him out.

The only prognostication I care to make at the moment is this: My gut tells me that the chubby champion is mentally tougher than his ill-fated predecessors. He might win the rematch and he might lose it. Either way, I don’t think he’s going anywhere.

[QUOTE=wileyhemi;20013189]Yeah; I was amazed the dough boy took that shot[/QUOTE] It was a very similar shot to the one Wilder KO'd Breazele with yet Andy Ruiz took it with ease.

[QUOTE=Digital Mouth;20008512]AJ will have to double up on them protein shakes because at the moment he doesn't have the power to KO Andy Ruiz. That 2nd shot Ruiz took after the first knock down would've catapulted most fighters out of…

[QUOTE=Deontay Wilder;20010750]Think about it this way...he had like three weeks to prepare for AJ. How dominating is he gonna look when he has months to prepare?[/QUOTE] Agree. Ruiz beats him easier in rematch. AJ learnt nothing from Ruiz fight. He…

The irony is that u don't realize how fin inept u just showed the world u are. Dumbazz. How tf do u know wut he spent anyway....why dont u tell us wut his breath smells like while ur at it.…