Like virtually every other fight in boxing, Cancio’s 10-round bout against Tyler McCreary has been postponed due to the COVID-19 pandemic. The Cancio-McCreary match was supposed to be part of ESPN’s Naoya Inoue-John Riel Casimero undercard April 25 at Mandalay Bay Events Center in Las Vegas.

Unlike most championship-caliber boxers, Cancio’s livelihood isn’t solely dependent on purses from fights. That makes the 31-year-old father of two more thankful than ever for his physically demanding gig as a construction technician on a crew that fixes gas leaks, an essential occupation if ever there were one.

“It just goes to show how blessed you are at a time like this,” Cancio told BoxingScene.com. “A lot of people told me I should quit my job and focus on boxing. But man, here it is again. I’m glad I’m not depending on boxing money to make ends meet. I’m very blessed to be able to be in both worlds, as a world champion and then as a full-time employee that has a good job, with good benefits, that is essential, where I don’t have to worry about, ‘When am I gonna be fighting again? When is all this gonna be over?’ So, I’m truly blessed in that aspect.”

Cancio never really considered quitting his day job, not even after he upset Puerto Rico’s Alberto Machado by fourth-round knockout to win the WBA’s super featherweight title in February 2019. He earned six figures apiece for his two title defenses, yet not enough to warrant walking away from job security and full benefits for him and his children.

Cancio empathizes with less secure boxers who don’t know when they’ll be able to fight again. He is particularly concerned for the fighters who haven’t made the type of money that’ll render missing a few months inconsequential financially.

“I feel for the fighters because that’s what I used to do,” Cancio said. “I used to just depend on boxing. And when a fight fell through, it was devastating because you were looking forward to that money. So, I know how these boxers are feeling right now that depend on the fight money to survive, to make their rent, everything. I’m glad I’m blessed to have this job.” 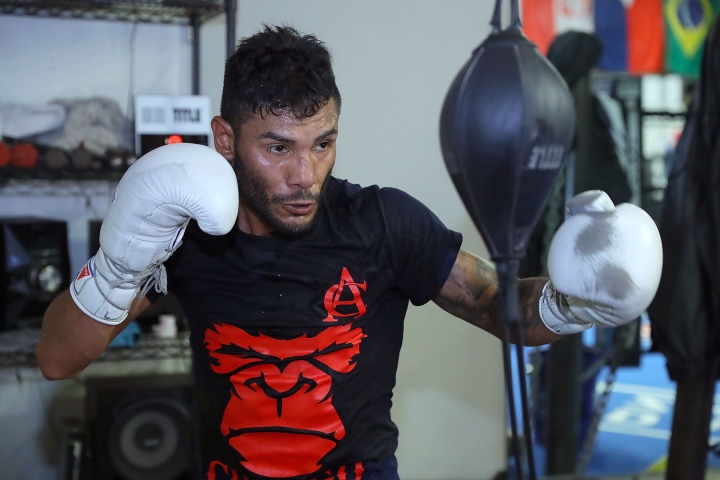 Without having to train after work and on weekends, Cancio has been able to work some overtime recently. The extra money will come in handy because he has hired a tutor for $300 per week to help home school his 11-year-old daughter, Audrina, and his 8-year-old son, Ethan, while their school is closed.

“I can’t do that,” a laughing Cancio said. “I’d rather work the overtime to pay someone to come in who knows how to keep calm and actually get through to them. She’s a great, great tutor. We’ve been using her throughout the whole school year for one hour, twice a week. We’re trying to keep them on the same schedule. It’s gotta be hard on my girlfriend. She’s here all day with them, Monday through Friday, when I go to work. She’s been holding the house down.”

Government-mandated self-isolation also has made Cancio appreciate having a job for which he has to leave his house every day.

“I’m just lucky that I get to go out and be with my co-workers, talk some sh-t and talk to somebody different,” Cancio said. “It’s crazy to say, but you look forward to going to work, talking some sh-t to your co-workers, you know, busting each other in the morning. Right now, it’s just crazy for everybody. We all have the same stories. Our girlfriends or wives are bored at home, while we get to go to work and at least get a break.”

Cancio hopes his break from boxing doesn’t last too long.

The ex-champion was excited about making his debut for Bob Arum’s Top Rank Inc. Golden Boy Promotions terminated Cancio’s contract two days after he lost his WBA belt to Rene Alvarado on November 23 in Indio, California.

Cancio (21-5-2, 16 KOs) was favored to beat Nicaragua’s Alvarado (32-8, 21 KOs), whom Cancio knocked out in the eighth round of their first fight in December 2015. Alvarado, the mandatory challenger for Cancio’s title, won by technical knockout after the seventh round of what was a surprisingly one-sided rematch.

By early the following Tuesday morning, barely 48 hours after he lost his title, Cancio was back at work for Southern California Gas Company.

“I just took Sunday and Monday off,” said Cancio, who also knocked out Machado in the third round of their immediate rematch. “There’s nothing you can do. You’ve just gotta hold your head up high and resume on. I’m fortunate enough to have gotten another opportunity with a promoter after getting dropped by Golden Boy. Getting picked up by Top Rank, another top promoter, that was a blessing as well. You’ve just gotta keep your head up high, move forward and try to continue my story. Hopefully, I’ll get another world title shot and I’ll win another one. That’s the plan.”

Arum intends to reschedule Cancio’s fight against McCreary (16-1-1, 7 KOs), of Toledo, Ohio, whenever the boxing business returns to some semblance of normalcy. If Cancio can get back to his winning ways, he could eventually fight the winner of the Jamel Herring-Carl Frampton fight for Herring’s WBO junior lightweight title or the Miguel Berchelt-Oscar Valdez battle for Berchelt’s WBC super featherweight crown.

“I’m just very excited to get back in there, and hopefully we get a ‘W’ and continue on this journey,” Cancio said. “I know Top Rank has a lot of great fighters at 130 pounds that I would love to fight. So, I’m just super-excited to have a different promoter and what they’ve said about how they wanna promote me. Hopefully, this doesn’t last too much longer, and everybody stays safe. Until then, we’re gonna keep doing our part, staying indoors as much as possible, with me just going to work and that’s it.”