Andre Ward: What's Next For Me? Cruiserweight? Heavyweight?

Andre Ward has stopped Sergey Kovalev in the eighth round to win their rematch and retain his unified light-heavyweight world championship.

The 33-year-old Ward extended his perfect record to 32 wins in an impressive performance, albeit with a controversial ending, at the Mandalay Bay Hotel and Casino in Las Vegas.

Ward won the pair's first meeting last November via a unanimous but tight decision, with Kovalev aggrieved at the result having knocked the American down in round two, and the rematch was eagerly anticipated. 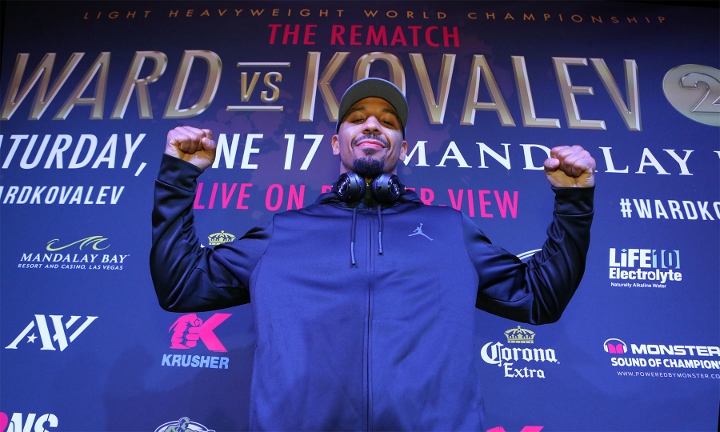 Again the Russian started stronger, with Ward firing off enough counter-shots to keep himself in the fight but looking weary between rounds.

The momentum began to shift the American's way as the fight reached halfway, though, with both fighters landing some fierce shots in a more open and aggressive encounter than their first bout.

And after wobbling Kovalev midway through the eighth round with a straight right hand, Ward finished the job with a series of powerful body shots, including a few borderline low blows.

After the fight, Ward gave hints that he might consider the possibility of moving up in weight to either cruiserweight or heavyweight.

Ward would like to emulate one of his idols, Roy Jones Jr., who moved up in weight to win titles at middleweight, super middleweight, light heavyweight and even heavyweight. Jones, who is way past his best days, continues to fight at cruiserweight.

“What's next? Cruiserweight? Heavyweight? I dream big. Anything is possible when you have God," Ward said. "“If there are questions marks after this, that has nothing to do with me. I’m going to enjoy my family, kiss my wife and we out."

I honestly feel like his can do what James Toney and Roy Jones fif and just use his Quickness take some of them in Deep Waters and out-box some of them for 12 Rounds :dunno: AJ too BIG that is…

After what I saw in this fight nothing will surprise me. Ward will even beat Joshua.

[QUOTE=aboutfkntime;17774116]I agree he is a first-ballot HOF'er but if he wants to be regarded as great, then Stevenson is exactly who he should fight next he dropped the ball with Bute imho, that was cheap shine..... he absolutely should get…