Andre Ward: Shakur's Potential Fight In June Not Official, But He Will Be Ready

Whether on June 9 or a date more in line with finalized testing standards, Shakur Stevenson will be ready to fight.

At least that much has always been assured by his management team, which consists of James Prince, Josh Dubin (also Stevenson’s attorney) and former unbeaten two-division champion Andre Ward. That very competitive drive was among the key reasons the aforementioned trio eagerly signed the 2016 Olympic Silver medalist and current unbeaten featherweight titlist.

“I know for a fact that Shakur Stevenson has that [old-school] mentality,” Ward insisted during the most recent edition of ESPN’s State of Boxing series, for which he is a weekly panel member. “He’s a younger guy but I’ve always been impressed by his old-school mentality.

“He stays in the gym, he works out a lot and wants to fight often.” 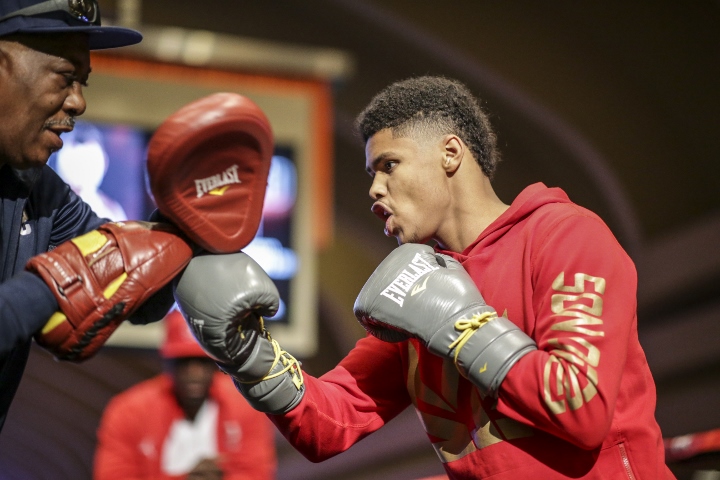 Stevenson (13-0, 7KOs) is reportedly due to headline the first closed-doors event to be staged by Top Rank, with a working date in place of June 9 at a venue to be determined in Las Vegas. There is a lot that still needs to happen before finalizing those plans, including all parties working out the testing protocol to comply with current health standards amidst the ongoing coronavirus disease (COVID-19) pandemic which has all but shut down the sport since mid-March.

The selection of Stevenson to headline the first event makes sense since he was among the initial batch of boxers to lose out on a scheduled fight due to the spread of COVID-19 worldwide. The 22-year old southpaw from Newark, New Jersey was due to defend his 126-pound title versus Colombia’s Miguel Marriaga (29-3, 25KOs) atop a March 14 card live on ESPN from Madison Square Garden’s Hulu Theater in New York City.

The event was shut down two days prior to the opening bell, with no hopes of rescheduling the show as a whole. Stevenson’s first fight back will come in a non-title capacity at 130 pounds, where he plans to campaign absent a unification showdown versus fellow unbeaten featherweight titlist Josh Warrington (30-0, 7KOs). For now, Mexico’s Rafael Rivera (27-4-2, 18KOs) is rumored to top a list of potential candidates to face Stevenson, although all details remain fluid.

What remains constant is Stevenson’s readiness to fight anyone and anywhere once he and his team are given the green light.

“Shakur’s potential fight in June is not official,” Confirmed Ward. “I can tell you he’s been notified about it. Even weeks ago, we told him multiple, multiple times (to) stay ready, stay in shape.We don’t know when things are gonna be up and going. Top Rank [is] working on a plan, so be ready so you don’t have to get ready.

“He’s done that. I think this thing is days away from being finalized, but he will be ready I believe for early June and I can’t wait.”

[QUOTE=tokon;20570393]Any details on the offer, as this is the fight Stevenson was/is calling for?[/QUOTE] No details was released by Hearn and Ward. Just that an offer was made from Team Warrington and rejected by Team Shakur (Without him knowing) as…

[QUOTE=Tbone27;20570362]I wish Stevenson would unify with Russell Jr before moving up. It'd be a great fight and neither guy is a big draw so there's no reason it couldn't happen without fans in attendance[/QUOTE] I think GRJ gives him a…

[QUOTE=Ray*;20570312]Has Shakur been notified about this? He wasn’t notified by Ward that Team Warrington made an offer to him. He embarrassed himself in social media not knowing that his own team which included Ward kept the offer away from him.…

I wish Stevenson would unify with Russell Jr before moving up. It'd be a great fight and neither guy is a big draw so there's no reason it couldn't happen without fans in attendance