Andre Dirrell vs. Jose Uzcategui Rematch in Play For January 27

The expected rematch between super middleweights Andre Dirrell and Jose Uzcategui is being targeted for January 27, according to promoter Fernando Beltran of Zanfer Promotions, who handle Uzcategui.

The initial fight took place on May 20, for the interim-IBF world title, but the contest ended in a disqualification after Uzcategui landed a knockout punch that caught Dirrell after the bell and put him down. Dirrell informed the referee that he was unable to continue.

After the fight there was criminal act committed, when Dirrell's uncle and trainer Leon Lawson entered the opposite corner punched Uzcategui in the face. 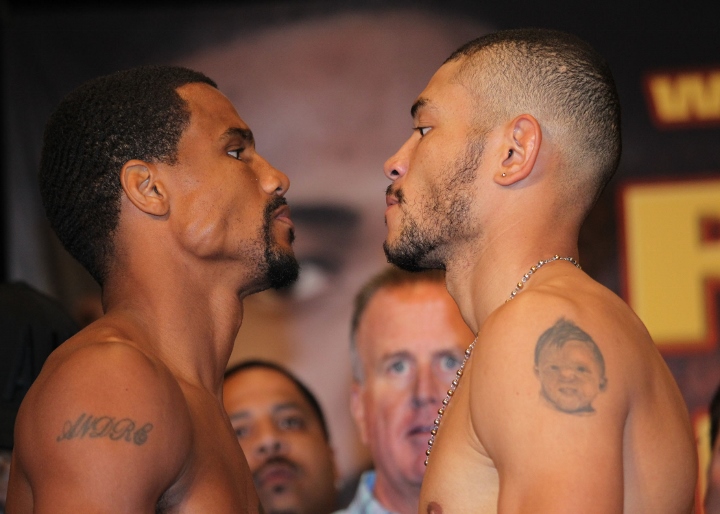 There were criminal charges filed and Lawson was banned from working Dirrell's corner by every major sanctioning body.

The IBF ordered a rematch between the two boxers, with the winner receiving a mandatory crack at world champion James DeGale of the UK.

Beltran revealed that they already have an agreement for that date and that this time he expects things to end in favor of Uzcategui.

"Uzcategui will return on January 27 with Dirrell, in Los Angeles, and that comes with pride to get him a new opportunity that he deserved for the way the first fight ended, and my prediction is that once again Uzcategui will win by way of knockout," said Beltran to ESPN Deportes.

That date of January 27 in Los Angeles is slated as the Showtime televised return date for former three division world champion Mikey Garcia.

Garcia's opponent has long been said to IBF lightweight champion Robert Easter. But there has also been several other opponents rumored like Omar Figueroa.

I just wonder in which round Dirrel will pretend to be hurt and out this time around....

[QUOTE=Derranged;18236507]The punch was late, but Dirrell should have been given five minutes to recover. The ref was too quick to call it off.[/QUOTE] Not sure how your supposed to stop throwing in a middle of a 3 punch combo? was…

Gets KO'd again. how that was DQ i dont know, dude was on the middle of throwing a 3 punch combo, got KO'd with the 2nd punch and the 3rd was on the bell.