Andre Dirrell: I Remember a Shot and Then Everything Went Fuzzy

Maryland - Co-featured on SHOWTIME CHAMPIONSHIP BOXING in a 12-round clash for the IBF Interim Super Middleweight Title, Flint, Michigan's Andre Dirrell, (26-2, 16 KOs), was declared the winner after round eight as Jose Uzcategui, (26-2, 22 KOs) of Merida, Venezuela, was disqualified for a punch after the bell sounded to end the eighth round.

Uzcategui started fast, battering Dirrell from the opening round, cutting off the ring and slamming away with body and head shot through the first three rounds. Dirrell saw success starting in the fourth round, countering Uzcategui and scoring
well.

Over the next four rounds, the contenders traded even as the fight became more hotly contested. At the end of the eighth round, with Dirrell backed into a neutral corner, Uzcategui let loose with a three-punch combination, the last left hand hitting the southpaw after the bell as he fell to the combination. 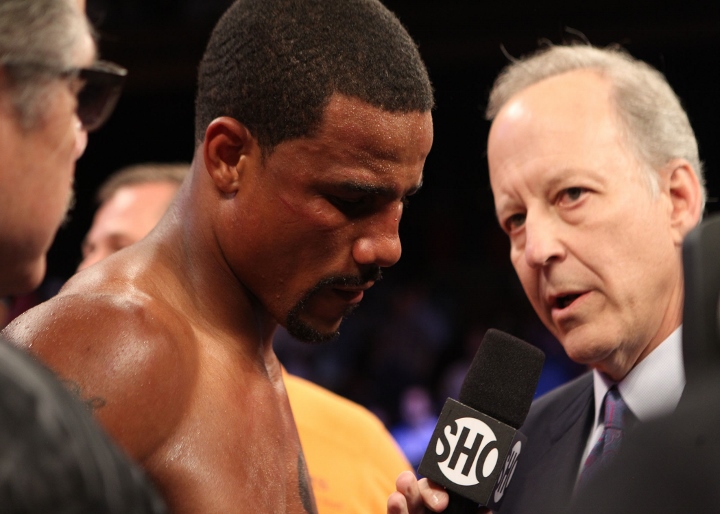 Following a delay to allow medical personnel to attend to Dirrell, referee Bill Clancy declared that Uzcategui was disqualified with Dirrell being declared the winner.

Said referee Bill Clancy about his decision, "The bell rang to stop the round. The round was over and Andre [Dirrell] was knocked out with an illegal punch. So therefore, Dirrell will win this fight by disqualification.

"That's a blatant foul. Earlier in the fight, I had warned Uzcategui. I warned him. Dirrell wins the fight, he was clearly unable to continue."

About the ending, Dirrell said, "All I remember was him [Uzcategui] throwing a shot at me at the same time the bell rang. After that everything was blurry. I remember a shot and then all went fuzzy.

"I forgive Uzcategui. I forgive his camp. I don't want to win a championship like this. I wanted to win fair and square. But I forgive him.

Following the decision, Dirrell's trainer and uncle Leon Lawson punched Uzcategui in the corner, sparking a brief altercation in the ring that was quelled by MGM National Harbor security and local police.

"I'm sorry for what my coach has done. My coach is my family, my uncle, and he was worried. He cares for me. He loves me. Please forgive him.

"I'm going to stand up like a man. I didn't win like I wanted to, but I'll be back. I'm going to come back as soon as they let me."

Well, how else are you supposed to feel after being clocked? A fighter can not be saved by the bell. Was that rule in effect? The Dirrells should just get out of boxing. Giving boxing a black eye.

[QUOTE=Devils Advocate;17690038]Unfortunately Uzcategui deserved the DQ. He was previously warned for that same behavior earlier in the fight. Those are intention fouls and clear signs of frustration. The ref lost control of that fight. He should have: 1. Called time…

Another acting job well done by Dirrel... He was saved by the bell and coronated by the referee while he was still out. Pathetic

Dirrell vs Abraham the biggest farce I've seen. Dirrell sits there for 3-4 seconds then falls over and rolls in agony. This dude is a whimp. Respect for being in the ring, but truly a glass heart