In a preliminary exam on Friday, June 2, a Prince George County District Court judge dismissed all felonious assault charges against Leon Lawson Jr., who turned himself in to Maryland police this week.

Previously, Lawson faced up to a 25-year prison sentence and a $2,500 fine on the first-degree assault charge against and another 10 years on the second-degree assault charge. After the recent hearing, charges have been dropped down to a single count of misdemeanor assault. 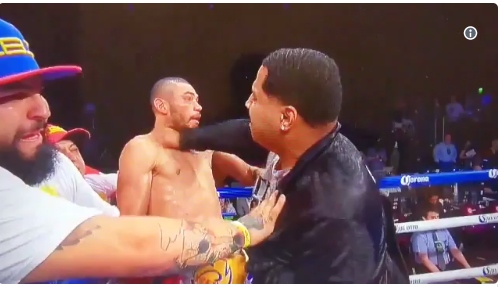 According to Lawson Jr.'s attorney, Frank J. Manley, his client's trial date has been set down for August 16.

The fight with Uzcategui ended in controversy, when the Venezuelan boxer landed a late punch that knocked Dirrell out after the bell. Following the referee's decision to disqualify Uzcategui, Lawson entered the ring and walked over to Uzcategui's corner - and then sucker-punched the boxer right to the jaw with his bare fist. He attempted to throw two more punches that missed the mark.

After the fight, Dirrell apologized to the live crowd for the actions of his uncle.

"That's my man, that's my brother, that's my uncle, that's my coach," Dirrell previously said. "He cares about my well-being first so I don't understand why he did that, because, like I said, I feel fine but this is just the way the cards is dealt sometimes."

Lawson has since been suspended in Maryland, and several of the sanctioning bodies like the WBC, WBA and the IBF have suspended him as well. Usually when a local commission issues a ban, the majority of the major commissions will follow their lead.

Told ya'll the felony wouldn't stick. It was a "heat of the moment" type thing and no one was injured so I don't see the big deal.

[QUOTE=.:: JSFD26 ::.;17738501]Yea, I came here to say the same thing. What about charges for running?[/QUOTE] That's what I'm trying to figure out...how was he not immediately apprehended after it happened? I was sure that a member of the security…

Andre Dirrell had mega talent, and he wasted it by not fighting and hanging out with crazy people.

[QUOTE=WesternChamp;17738694]all for nothing. if dirrell was out cold then i can see why the trainer did what he did but dirrell was up and about when the trainer threw that sukka punch.[/QUOTE] Could you imagine ifn everytime a fighter was…

Just like Panama Lewis, he should be barred from ringside and cornering for the rest of his life.