Andrade To Charlo: I'm The Best And Willing To Put That In Action

The back and forth battles between Demetrius Andrade and Jermall Charlo continue in every way imaginable but the most fitting format—boxing in the ring.

“Seven million! C’mon man! That's a lot of money!” Andrade told Hearn, referencing the sum that was offered to Charlo so that a fight could take place. “Supposedly he says that he’s the best. I say that I'm the best, and I'm willing to put that in action. It has to be the other way around too. All I can do is keep winning and take the challenges.” 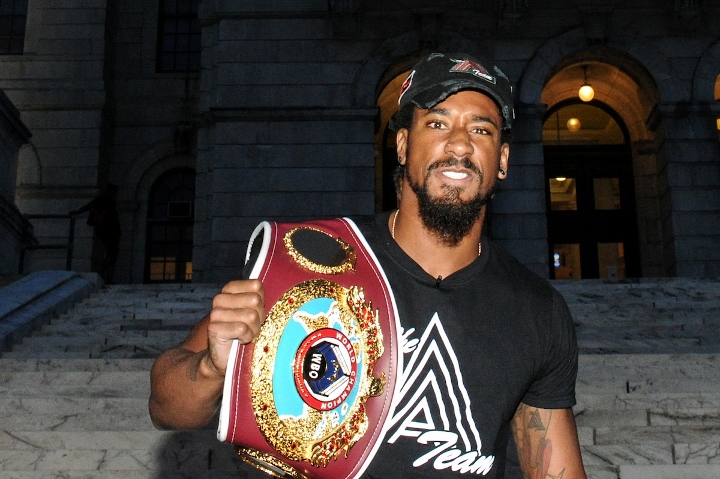 “Boo Boo” said a lot of boxers are making business decisions to avoid him because they perceive him as the boogeyman, and a loss against him would diminish their stock value.

Charlo was offered a one-fight deal by Hearn in December to fight Andrade on DAZN and unify the division's titles but ultimately decided to turn it down.

“You have to look at it as a business,” said Andrade. “Win, lose or draw, [fighting me is] going to kill their cha-cha-cha-ing! Some people lose, and their contract goes down a number. Why are they going to take the risk of fighting Andrade if there is a possible chance of them losing and having to start all over again. If you’re good, if you’re Canelo Alvarez, Gennadiy Golovkin, Billy Joe Saunders or the Charlo brothers, and if you lose to the better man in me, and you continue to show your own legacy, you can still be a Hall of Fame guy. You just lost to the greatest guy. That’s how I look at it. I want to put my skill, talent and willingness against anybody.”

Hearn outlined a plan in which Andrade would next fight WBO mandatory challenger Liam Williams before securing a showdown with Saunders.

Andrade is coming off a one-sided, ninth round TKO win over Luke Keeler in January.

[QUOTE=ShoulderRoll;20490722]How can you turn $7 million for one fight if you are Jermall? Charlos = Pus[I]s[/I]ies Only.[/QUOTE] Point of order; wouldn't Liam Williams count as a fight? Sounds like two fights, not one. Personally my finances would say take it,…

Fight probably could've been made had hearn not included the Liam Williams shenanigans as a "first do this". Whether you like it or not many fighters do not like it (the adding of "conditions" for a contracted fight). Once again,…

[QUOTE=Caxcan;20491264]There's no reason for Charlo to be counting Mikey's money when he's being massively overpaid as it is. Not to mention he did worse numbers on Showtime than Mikey, never been on ppv, less proven in terms of accomplishments, and…

Turning down 7m and the chance to unify for what? I hope he has a better offer otherwise that looks a lot like a duck

[QUOTE=Cool Scant;20489665]Hearns mistake was giving Mikey Garcia $7M to fight a fringe contender. WTF would Charlo take the same amount of money for a unification and the opponent is much more dangerous than Jesse Vargas? and don’t use the excuse…