Amir Khan: Knockout Loss To Canelo Made Me a Serious Fighter!

AMIR KHAN has been boosted by career advice from Dennis Wise ahead of his boxing comeback.

The pair became friends during their time in the hit TV series I’m a Celebrity…Get Me Out of Here!

Khan, 31, who took part in the reality show while recovering from a hand operation, boxes for the first time in nearly two years against Canadian Phil Lo Greco on Saturday. 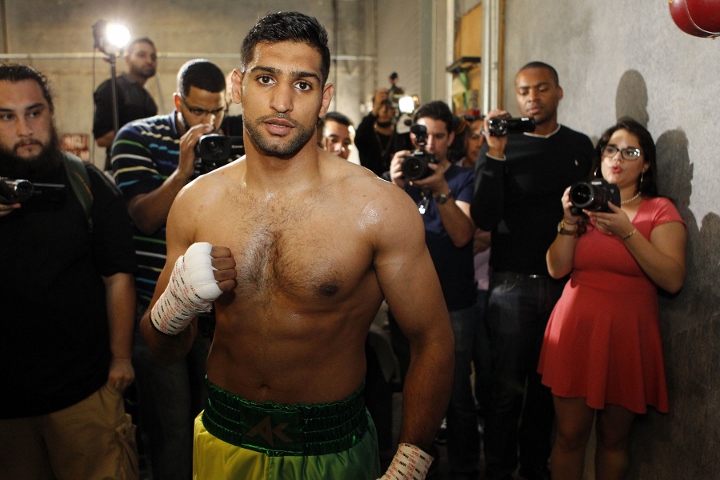 And the Bolton fighter’s concerns for his future were eased after chatting with the former Chelsea midfielder.

He said: “Dennis is a brilliant guy. I got on with everyone in that jungle, we all got on really well.

“Dennis is a former Premier League footballer who is a brilliant guy and sportsman.

“He gave me a lot of advice about how to be smart in the future, what to do, what not to do.

“As someone who has been there and done it, he gave me some good advice about how to come back from injuries. For example, I had the hand injury and he was telling me he had a big operation as well when he was in football. He was saying things like, ‘Be smart, Amir’.

“He retired from football when he was a lot older than I am now and was saying, ‘At the end of the day follow what your body feels. If your body is okay, keep going’.

“He retired because he kept getting injuries. Your body will let you know when it is time to call it a day.

"At the moment my body feels great, I’ve only had one hand operation the whole of my career. Other than that I’ve always been fit and strong.”

But the welterweight, who was last a world champion six years ago, cannot afford a fifth career defeat in Liverpool if he wants to continue at the top.

Mexican middleweight Saul ‘Canelo’ Alvarez knocked out Khan in May 2016 after he stepped up two weight divisions.

But Khan insists defeats have not taken their toll and feels at his best and said: “I’m training as hard as ever and physically I feel better than I did when I was 28.

“I’m a bit smarter now. I’m letting my skills win me fights from now on.

“Me having that knockout against Canelo made me a serious fighter, a fighter who wants to make things better and finish on a high.

“I’m 31, at the peak of my career. I don’t think those knockouts are going to be really bad. I have had my best performances after getting beaten.”

Khan is only fighting again to try to win some fights so he can show his missus that he can still fight and impress her, or she might start messaging other boxers again. I think her pus5y went permanently dry…

The only thing it should make you is into a serious defense fighter who explodes with combinations then goes into hedgehog whether on your feet or defensive style. Why for ****s sake is it so hard for a fighter to…

does anybody else have the feeling that goosen is gonna get khan KO'd? don't know why, but it's been a long time since he fought for the last time and khan's been hurt by low level fighters before, so.... who…