Top Rank and Main Events announced Friday that the second Kovalev-Alvarez fight will take place early in 2019 at an undetermined venue. Through its content partnership with ESPN, Bob Arum’s Top Rank Inc. was able to offer an undisclosed seven-figure license fee HBO wasn’t willing to match to air the Kovalev-Alvarez rematch.

Eddie Hearn – whose promotional company, Matchroom Boxing, has a partnership with Perform Group’s DAZN streaming service – also made a very competitive offer for the rights to the second Kovalev-Alvarez fight.

HBO, which has televised Kovalev’s past 14 fights either live on the network or on pay-per-view, had the right of first refusal to any offer Main Events’ Kathy Duva (Kovalev) and Michel (Alvarez) received for a Kovalev-Alvarez license fee. HBO’s Peter Nelson and Duva had been negotiating to keep Kovalev’s next fight on HBO, but the ESPN offer apparently was too good to pass up. 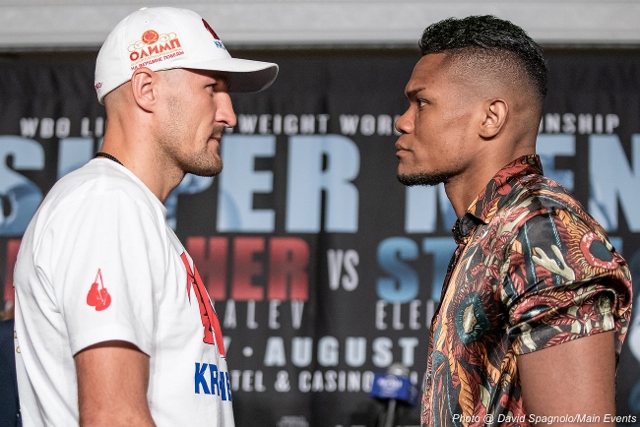 “Bringing this marquee rematch to boxing fans on ESPN is a great way to start 2019,” Top Rank president Todd duBoef said. “The light heavyweight division is loaded, and both Kovalev and Alvarez have fan-friendly styles that will make for another gripping fight.”

Russia’s Kovalev (32-3-1, 28 KOs) exercised his contractual option recently for an immediate rematch versus Alvarez (24-0, 12 KOs), which must take place by February.

The Colombian-born, Quebec-based Alvarez pulled off an upset when he knocked out Kovalev in the seventh round of an August 4 bout HBO broadcast from Hard Rock Hotel & Casino’s Etess Arena in Atlantic City, New Jersey.

The 35-year-old Kovalev was winning their fight on all three scorecards – 59-55, 59-55 and 58-56 – when Alvarez caught Kovalev with a right hand to the side of his head in the seventh round of their scheduled 12-rounder for Kovalev’s WBO 175-pound title. Kovalev got up and tried to fight out of that trouble, but Alvarez dropped him twice more before referee David Fields stopped the action at 2:45 of the seventh round.

“We are very happy to be joining forces with Top Rank and ESPN for what we expect will be another exciting and historic fight,” Duva said. “Sergey was clearly winning this first bout with Alvarez when he just got caught. It happens. Congratulations to Alvarez for his spectacular performance, but Sergey is a warrior. He let me know that he is anxious to avenge this loss as soon as possible.”

Before Alvarez stopped him, Kovalev was widely viewed as one of the best boxers in the sport, even after back-to-back losses to Andre Ward in November 2016 and June 2017.

Ward defeated Kovalev by unanimous decision in their first fight, an extremely close contest some fans and media believe Kovalev won. Ward (32-0, 16 KOs) stopped Kovalev in the eighth round of what had been a very competitive immediate rematch, though the stoppage caused controversy because Ward landed several body blows on or below Kovalev’s belt line just before referee Tony Weeks halted the action.

Ward was considered the best boxer, pound-for-pound, in the sport prior to his retirement nearly a year ago.

[QUOTE=Mike D;19097946]I'm now on the verge of cancelling as well It's sad because HBO has been such a staple in the sport but it's a mere shell of its former self Who do they even have left? Heck Canelo may…

[QUOTE=GGG Gloveking;19098809]Alvarez is going to KO that chinny bum again. Khanvalev[/QUOTE] Fuk no! Kov got this.