Ali: I Don't Deserve Cotto? You Haven't Paid Attention To My Career

BROOKLYN, NY - Current WBA International Welterweight Champion Sadam "World Kid" Ali (25-1, 14 KOs) today hosted a media workout at his gym in Brooklyn ahead of his fight against Miguel Cotto (41-5, 33 KOs) for the WBO World Junior Middleweight Championship set for this Saturday, Dec. 2 at the World's Most Famous Arena, Madison Square Garden, which will be televised live on HBO World Championship Boxing beginning at 10:00 p.m. ET/PT.

Ali takes a big risk by moving up in weight to take on his most dangerous and most experienced opponent to date.

Cotto has tabbed the upcoming contest as his final career bout. He fully intends to retire from the sport in the aftermath. 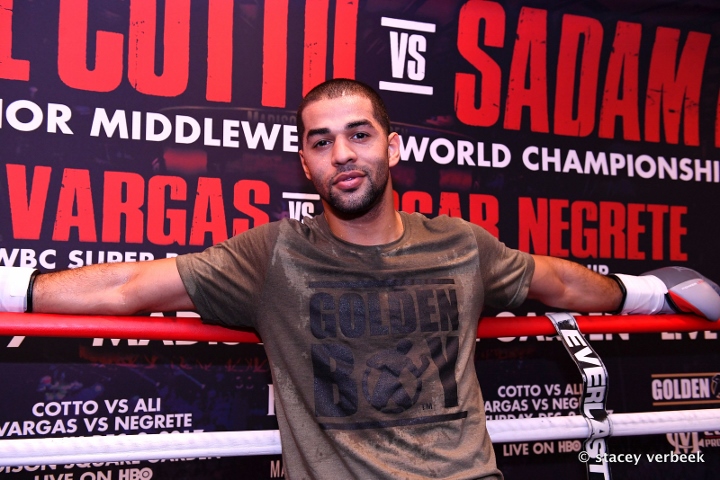 Not everyone is pleased with the selection of Ali, as they don't view him as being deserving of the fight.

Ali, who won three in a row since suffering a TKO loss to Jessie Vargas last year, believes he is very deserving of this shot.

"I'm really excited to be fighting at MSG against a legend. I know what's in front on me, and I know what I'm stepping up to. I'm different, I'm a bit of a boxer, I can brawl if I need to, and I have my little tricks. My motivation is being on HBO, it being a world title, and my career honestly. People say I didn't deserve this fight, but they haven't been paying attention to my career," Ali said.

"This is my hometown. I grew up here. Cotto is coming to my territory. He's got power; I need to focus on not getting stuck. I worked a little bit with Danny Jacobs and Curtis Stevens for this fight. I want to thank all the fans who are coming to watch my fight! It'll be a great one!"

Andre Rozier, the longtime head trainer of Ali, is confident his fighter will step things up to clinch this huge opportunity.

"Sadam knows that this is the opportunity of a lifetime. We took the fight knowing what we had to step up to. Sadam's ready. He's been ready for a fight like this," Rozier said.

Who is deserving to be the sacrificial lamb for Cotto's last fight? Come on, Cotto loses to all the top guys, it's his last fight, if he wants to go out with a win, that's cool. He has earned that.…

[QUOTE=.!WAR MIKEY!;18255685]yeah but PR had a rough year all they need is for another puerto rican to get beat by a mexican lol we aint got the man power to have an entire island on suicide watch![/QUOTE] you're overestimating the…

I saw you getting knocked around the ring like the little b1tch that you are in your last fight. You'll never amount to sh1t in boxing.

[QUOTE=rrayvez;18255651]yeah, this is a trash fight. Too bad Mikey Garcia turned it down after asking for it on social media.[/QUOTE] yeah but PR had a rough year all they need is for another puerto rican to get beat by a…