Alfredo Angulo told anyone who’d listen prior to Saturday night that he feels like a new fighter under the tutelage of famed cornerman Abel Sanchez.

It showed in his picking up his first win in nearly three years, blasting out Evert Bravo in two rounds Saturday evening at Dignity Health Sports Park in Carson, Calif.

A flurry of punches along the ropes willed Bravo to the canvas, with the contest waved off without a count. 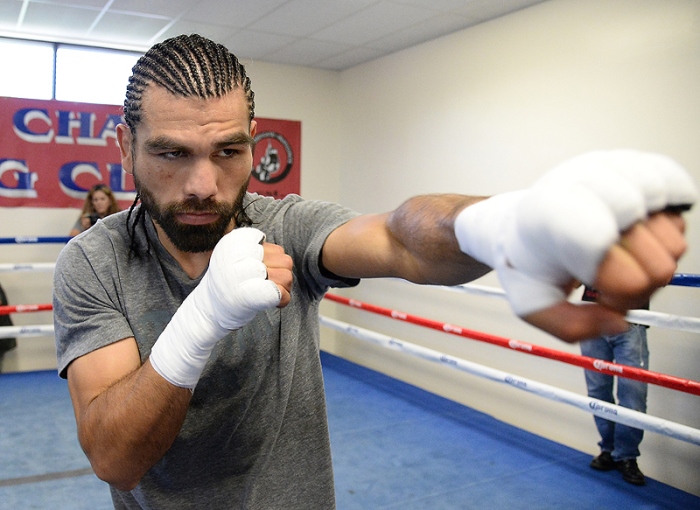 Admittedly, Angulo was ready to call it a career a couple of years ago before deciding he not only had more to offer the sport, but also to those who’ve always believed in his ability. The newfound motivation showed in a performance that saw the 36-year old more active than ever from bell to bell.

Bravo (24-10-1, 18KOs)—a 31-year old from Colombia fighting in the U.S. for just the third time in his career—struggled to keep pace with the former interim titlist. Angulo has lost some speed off of his fastball, but committed to every punch thrown.

The payoff came in round two, when Bravo was pinned on the ropes and unable to defend himself. Angulo had his opponent hurt courtesy of a left hook, landing six unanswered punches in a fight ending sequence which culminated with a right hand to send Bravo to the canvas for the bout’s lone knockdown and without another punch thrown in the bout.

The official time was 1:23 of round two.

Angulo improves to 25-7 (21KOs) with the win, his first since a 5th round knockout of Hector Muñoz in Aug. ’15. A pair of decision defeats to Freddy Hernandez and Sergio Mora—the latter marking his first fight with Sanchez—left his career in peril, but he’s spent the past year fully growing into a super middleweight frame rather than settling on the weight.

“The past three or four years of my career haven’t been that good,” Angulo admitted to Fox’s Heidi Androl. “Now I have a new coach in Abel Sanchez. He’s taught me all of the things I forgot to use.”

Omar Juarez made the most of his unexpected airtime, with the unbeaten 19-year old scoring a four-round unanimous decision over DeWayne Bonds in their super lightweight bout Dignity Health Sports Park in Carson, Calif.

Juarez was the aggressor throughout the contest, but the fight wasn’t quite as dominant as was suggested in the final scorecards. Bonds absorbed a number of vicious body shots, but the 29-year old southpaw never stopped coming forward.

Both fighters pushed for a knockout ending in the fourth and final round. Juarez (3-0, 1KO) nearly had Bonds (3-2-1) out with a flush right hand midway through the frame, but the 19-year old from Brownsville, Texas was unable to close the show. Bonds quickly recovered, taking the fight straight to his younger foe but unable to make an impact on the cards.

Stick a fork in him and Margarito, both are shot to sht! Same with Allen Green who is fighting next month.

Good on Angulo. Should have hung em up a long time ago but glad he's still getting paid to do what he loves.