Alex Saucedo Hopes To Get His Hands on Maurice Hooker

Undefeated junior welterweight contender, Alex Saucedo (27-0, 17 KO's) makes a homecoming of sorts this weekend as he faces Lenny Zappavigna at the Chesapeake Energy Arena in Oklahoma City, Oklahoma as part of the ESPN broadcast this Saturday evening.

"It's a tough guy we have in front of us but I believe we're going to put on a great show," said Saucedo, who is trained by Abel Sanchez in Big Bear, California. 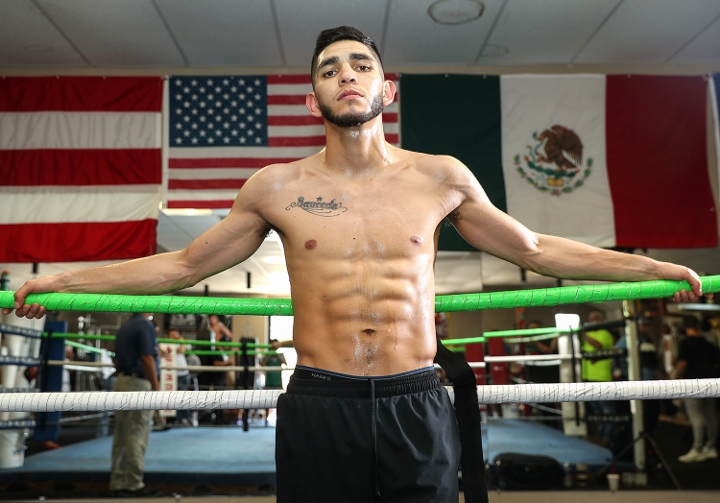 This match-up which is the co-feature before WBO super middleweight belt-holder Gilberto Ramirez faces undefeated challenger Roamer Alexis Angulo, figures to be a fan-friendly affair.

"You've seen this guys fights, he has a great knockout percentage, I do as well," said Saucedo of his opponent who has a record of 37-3 and 27 stoppages.

"So I believe it's going to be a great fight, everyone's going to enjoy it and we're going to come out with the victory, of course."

And if he should come out victorious, Saucedo told BoxingScene.com, "we'll probably get Maurice Hooker, he just won with (Terry) Flanagan, so we're going after that now."

Carl Moretti, the Director of Boxing Operations for Top Rank, explained, ''because Hooker and Flanagan fought for (Terence) Crawford's vacant title and the leading available contender would be Saucedo next, assuming he comes out of the 'Lenny Z' fight."

There are reports that Hooker would be joining the upcoming World Boxing Super Series junior welterweight tournament.

"We know that he's thinking about both but I don't think that decision has been made, yet," stated Moretti.

Everyone wants to lay hand on the hooker