Alex Saucedo: Barboza is a Big Fight For Me To Get Myself Back on Top

When boxing dusted itself off and began coming back from the COVID-19 pandemic in June, the reality of having no fans in attendance for the near future certainly hurt the bottom line of promoters, but for most boxers it would be a mere inconvenience, nothing a couple rounds in the ring couldn’t cure.

Then there’s Alex Saucedo. The former world title challenger made his name on delivering action fights that had fans roaring from start to finish. In fact, he once told me that the first thing he paid attention to while watching his 2018 brawl with Lenny Zappavigna wasn’t what he and his opponent were doing, but how the people in the crowd were reacting. If there was anyone in the sport who fed off the energy of those in attendance, it was him.

And now, there would be no fans when he stepped into the ring for his second fight since losing his challenge for Maurice Hooker’s WBO junior welterweight title in 2018. Saucedo got the taste of the seventh-round TKO loss to Hooker out of his system by blasting through Rod Salka in less than a round in November 2019, but 21-2 Sonny Fredrickson would be a stiffer test in Top Rank’s Las Vegas Bubble in June. Add in the missing crowd and still adjusting to a new training team, and the stage was set for an upset.

Saucedo didn’t let that happen, as he won a dominant decision over Fredrickson. As for fighting without a paying crowd in attendance, it wasn’t an issue for “El Cholo.”

“We had a long camp for that fight so I prepared myself mentally every sparring session,” he said. “So it didn't feel too much different than a sparring session for me. It was a good performance and I think that helped me a lot, putting it in my mind every day throughout camp when I was sparring and thinking that this is how the fight's gonna be.”

It was business as usual for the 26-year-old, who will make his second appearance in the Bubble this Saturday when he meets Arnold Barboza Jr., even if it isn’t the same world anymore.

“With or without fans, I'm excited for this fight,” he said. “It's a big fight for me to get myself back on top against a great opponent, so I'm looking forward to it.” 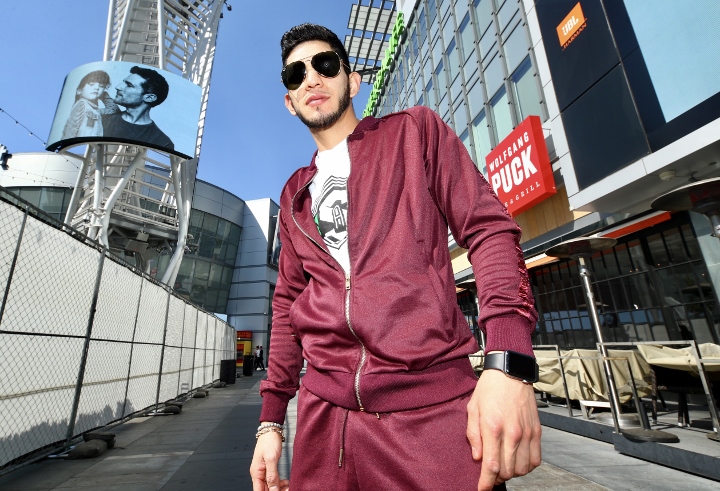 The fans might not be there live, but they will certainly be watching, as Saucedo-Barboza is the co-main event on the highly-anticipated Vasiliy Lomachenko vs Teofimo Lopez card, and there’s even more good stuff on the line for a hungry Saucedo looking to get another crack at the 140-pound belt.

“It's definitely that type of fight,” he said. “It's a WBO title eliminator, so there's a lot at stake in this fight. I've been very motivated throughout camp for the opportunity again and I can't wait to put all the things together that we've been doing with this new team, and after watching my last fight many times, I believe I'm gonna go in there and adjust a lot of things that we did wrong in the last fight.”

There weren’t many missteps by the Chihuahua native against Salka or Fredrickson, but against Hooker, the fan favorite found out that without adding some different looks to a seek and destroy style honed under the tutelage of Abel Sanchez, eventually someone was going to catch up to him.

That someone was Hooker, who survived a second-round knockdown and went on to halt the challenger in his hometown of Oklahoma City, handing him his first loss in the process.

Soon after, Sanchez was out as trainer and Pedro Neme Jr. and Eddie Autry were in. The duo weren’t going to try and reinvent the wheel with Sanchez, but they did want to let him know that it was all right to box as well as brawl. And while COVID-19 has slowed everything down, Saucedo has used the time wisely both before and after the pandemic hit with new coaches that know who they’re dealing with.

“It has been a really good year for me,” said the 30-1, 19 KOs Saucedo. “We've been putting a lot of time in with the new trainers and they focused a lot on that because they know that I'm the type of fighter that I get hit and I want to go back and get him back. But we've been doing it smartly now. This team knows me very well and over the past two years we've just been doing a lot of technical work. I have a great jab, so they're bringing it out, and I'm always gonna be that same aggressive fighter, but I think the technical work is gonna be the difference - moving side to side after throwing punches and not just staying there exchanging, and I believe this fight is gonna show a lot of what we've been doing. This is a fight to go out there and put it all to work and show my real boxing skills.”

Barboza, 24-0 with 10 KOs, will be a tough test, and he may be someone who forces Saucedo to listen to his corner and box if he wants to get the win. Then again, Barboza may crack him and the “old” Alex will come roaring back. Saucedo knows what people think. He also knows that to silence any doubters, he can’t talk about what he’s learned; he has to show it on fight night.

“There's a lot that I've been doing over these past two years, and I believe the work is gonna show this Saturday night,” he said. “Right now I can talk about it, but Saturday night, if I go out there and do the same old thing, it doesn’t matter. I can't wait to go out there and show the difference and the new Alex Saucedo. The aggressiveness is there, the hunger is there, it's just putting a little more of the boxing skill to it.”

[QUOTE=Mammoth;20810187]Barboza should win, all he has to do is throw uppercuts.[/QUOTE] :lol1: His last fight really showed he loves getting hit by uppercuts.

Thanks for the write up bc I believe this is going to turn into a fight and in short order. I almost misssed that is was happening with all that talk of those two little guys at 135 LBS. I…

[QUOTE=Mammoth;20810187]Barboza should win, all he has to do is throw uppercuts.[/QUOTE] Alex eats leather, that uppercut is just a snack to him. He goes for feints and moves his hands, but not his head. His defense is horrible. I hope…

[QUOTE=YoungManRumble;20810186]Any odds for this fight out yet? Seems like a true 50/50 or Barboza slight fav[/QUOTE] Barboza is a big favourite. Saucedo a 13/8 underdog. seems a bit wide for me, i expected it to be a pick em.

I'm surprised almost no boxing web sites listed this fight in the schedule. Not even an undercard mentioned.