Jimenez, who previously held the WBC's heavyweight championship, made a remarkable physical transformation to get down to 168-pounds to challenge Crews-Dezurn.

After ten rounds of war on January 11, Crews-Dezurn lost a close decision to Jimenez, who in turn became a two division world champion. 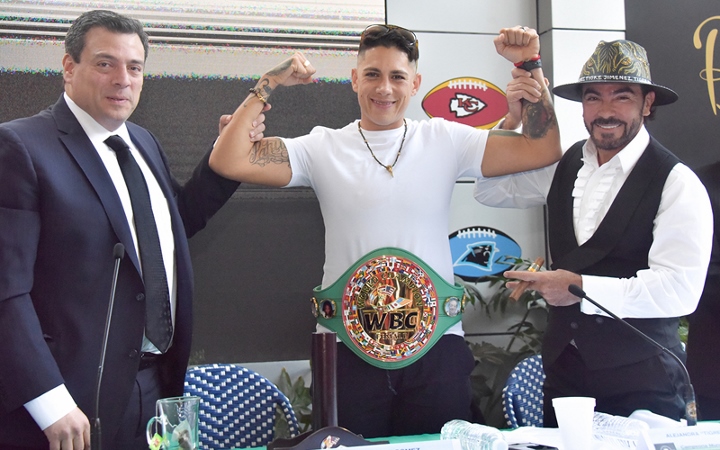 Neither party has indicated the substance or substances in question. The drug test was administered by VADA, as part of the WBC's Clean Boxing program.

Jimenez has promised to aggressively fight the charge - and plans to have her B-sample tested.

"Since 2019 I decided on my own to belong to the 'Clean Boxing' program of the WBC, because of the great respect I have for boxing and myself. I have always been against the use of illegal substances," Jimenez said.

"On December 15, 2019, VADA performed took the first urine and blood anti-doping samples, which turned out to be negative. On January 10 of this year, I was subjected to another urine anti-doping test, which was positive, a fact that surprised me since I have never used any illegal substance for my preparation.

"However, on January 11, I had another blood and urine test and it was negative again. I think there is an error in the test that tested positive, an error that affects my image and is detrimental to the example I want to give as an athlete. I will immediately request the analysis of the B-sample to prove the credibly that it has been a mistake."

De La Hoya plans to file an appeal to have his boxer reclaim her world titles.

"It is extremely unfortunate to learn that WBC and WBO super middleweight world champion Alejandra Jimenez has tested positive for banned substances after her title fight with Franchon Crews-Dezurn on January 11," said De La Hoya.

"As Franchon's promoter, we are incredibly disappointed for her as she worked incredibly hard to defend her titles.  However, our job is to ensure the safety of our fighters both inside and outside of the ring. Thus, we have always insisted and supported testing through the Voluntary Anti-Doping Association (VADA) for all of our world championship fights. Jimenez's fight against Franchon Crews-Dezurn is no exception. Now our job is to find justice for Franchon by working closely with the WBC and the WBO in order to re-instate her as a world champion."

[QUOTE=Citizen Koba;20346495]Ok we got various studies but most of 'em are fairly small, we got canelo's initial test results and those 3 days later (which aren't really consistent with normal rates of elimination but at an improbable squeeze might be…

[QUOTE=turnedup;20352600]How many athletes does Mexico send to the Olympics? How many of them have tested positive for clenbuterol? That is the most stringent testing in the world and the results don’t reflect these claims. With all due respect there are…

[QUOTE=JohnCastellanos;20352136]It takes a lot of money to be tested at that level and the truth is these Mexican boxers aren’t getting tested like Canelo and the ones that are a lot of them have gotten dinged for meat contamination. You…

[QUOTE=turnedup;20350221]Yeah..the meat..right..the richest Mexican athlete fails a test because of the meat..yet athletes barely making a living that have to eat at local food places somehow managed to always pass their tests..how convenient. Any time people mention “tacos” or the…

How can Jiminez be biologically a dude when she had a daughter at 21? Unless technologically has advanced and now Tran ya can also get pregnant and carry babies to full term I don’t see how that’s proof enough she’s…