SAN ANTONIO—Alejandra Jimenez continues to make history in the most unique ways.

The former female heavyweight titlist—the first ever from Mexico—pulled off an upset with a 10-round split decision over Franchon Crews-Dezurn to claim two bets at super middleweight Saturday evening at The Alamodome in San Antonio, Texas.

Crews-Dezurn won 97-93 on one card, but was overruled by far too wide tallies of 97-93 and 98-92 in favor of Jimenez, who once weighed 300 pounds but has now become a two-division titlist the hard way. 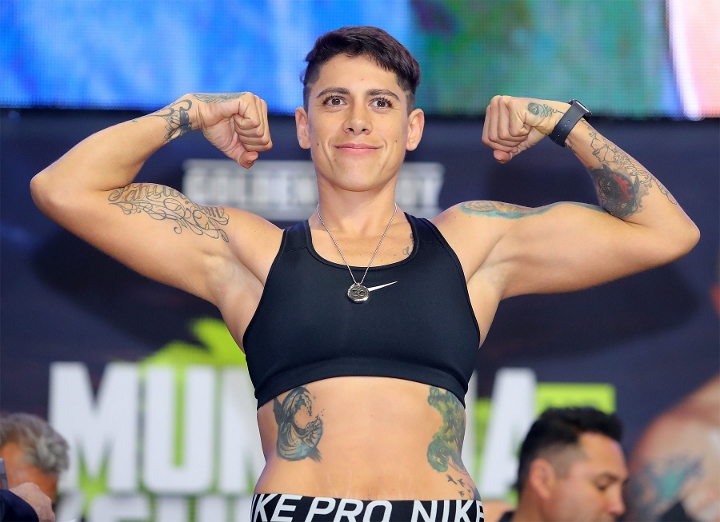 Crews-Dezurn promised to welcome Jimenez to the super middleweight division, and put her best foot forward right from the opening bell. A series of overhand rights managed to find Jimenez’s chin in forcing a furious pace in the first 30 seconds of the bout. Jimenez was reduced to clinching out of trouble, settling down in the final minute and able to connect with right hands to the body.

Action remained at a hectic pace in round two, with Crews-Dezurn looking to box more but drawn right back into a brawl as Jimenez connected with power shots upstairs. The former heavyweight titlist put her natural size advantage to proper use, touching the defending titlist with jabs which properly set up her long right hands. A right hand by Crews-Dezurn late in the round helped bail her out of trouble, though not enough to avoid a tongue lashing by head trainer Barry Hunter who demanded she avoid a slugfest.

It just wasn’t in the cards, as Jimenez found her offensive rhythm and continued to apply pressure. She also managed to pull the rabid crowd, filling the arena with chants of “Mexico” in efforts to rally behind the feel-good challenger.

Fatigue began to set in for both fighters, with an awkward exchange seeing the combatants tumble to the canvas late in round four. Crews-Dezurn regained her legs in round five, connecting with a left hook which barely caught Jimenez’s attention but enough to ignite a rally.

Crews-Dezurn turned the tide in the championship rounds, though had other issues to deal with beyond the incoming from her opponent. Time was called late in round nine for a hair scare as her weave became undone. In between rounds, it was no longer part of the equation as head trainer Barry Hunter demanded it be removed altogether.

As it turned out, only a knockout was going to save her title reign. Crews-Dezurn fought as if the fight was very much on the line, closing the show well enough to win on one scorecard.

“I’m not a sore loser,” noted Crews-Dezurn who did her best to take to the disputed defeat in stride. “I wanted to give San Antonio and the fans a show. I hope you guys were entertained. I don’t think I lost by that by wide margin. But I have to regroup.

The fight was already lost on the other two cards, with Crews-Dezurn seeing her unified title reign end just four months after winning the belts. The lone loss of her career came at the hands of pound-for-pound queen Claressa Shields when both made their respective pro debuts.

As Shields made her-story one night earlier in becoming a three division champ after just 10 pro fights following a win at junior middleweight, the hope of the new super middleweight titlist is for a superfight in the middle.

“I want to fight Claressa Shields, at middleweight,” insisted Jimenez, who remains unbeaten as she improves to 13-0-1 (9KOs) in her own history making performance.

Finally got to see this fight, this was a Fun Fight and they should run it back immediately The Wig was Ridiculous from the beginning honestly how the hell is boxing with a wig on even Legal? It was distracting…

Legit is that a dude? Seems questionable. Anyone know her story?

Haha!!! The wig was epic!!! Jimenez will be knocking shields braids wig off too!

Crude skills and both fighters gassed, but that was a hell of an entertaining scrap anyway. Both tough as nails, both throwing leather the whole fight. Set up a fight with Cederroos. I'd watch the hell out of that.