Efforts by Alejandra Jimenez to clear her name will soon transition to a process that calls for Franchón Crews-Dezurn to resume her previous role as unified super middleweight champion.

Mexico’s Jimenez (13-0-1, 9KOs) will now have to go through the appeal process after going through the necessary steps to prove she’s a clean fighter. Drug test results continue to suggest otherwise, including the outcome of her “B” Sample which was opened and tested on Wednesday. Two sources with intimate knowledge of the development have informed BoxingScene.com that the sample came back positive, as was the case from her “A” sample from a test surrounding her title fight win over Crews-Dezurn on January 11 from The Alamodome in the San Antonio, Texas.

A test sample taken and collected by officials contracted by Voluntary Anti-Doping Agency (VADA) on January 10—on the eve of the title fight—came back positive for the banned substance Stanazol. The news made the rounds on January 24, nearly two full weeks after the fight which saw Jimenez claim a 10-round split decision that was already disputed in the ring. 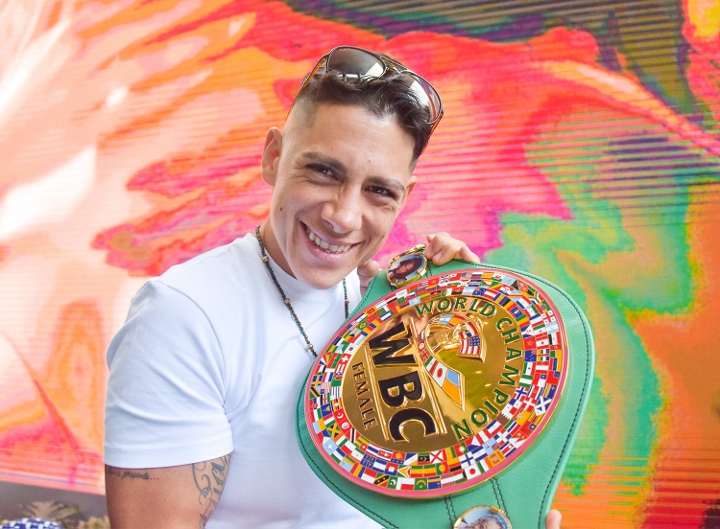 The drug testing angle created an entirely different dialogue— and a mess, to boot.

As is the case in all drug testing cases, the offending party has the right to either have their “B” sample tested or go straight to a hearing. The latter affords the offending party a platform to provide evidence suggesting contamination or ingestion of said substance through unintentional means.

In this case, Jimenez opted to have her “B” sample tested, choosing the latter of three offered dates—February 5, 12 or 19. Jimenez chose the latter of the three as a matter of convenience to her schedule, as she wanted to be present at the time of the sample being opened.

Meanwhile, the Texas Department of Licensing and Regulation (TDLR) have already taken the step of changing the fight outcome on February 10 from a win for Jimenez to a No-Decision. Jimenez was also issued a 90-day suspension as a result. The ruling was to stand pending the aforementioned test results, with the presiding commission now having to decide on additional administrative action including any levied fine.

The two sanctioning bodies involved—the World Boxing Council (WBC) and World Boxing Organization (WBO)—have conducted their own investigations, while publicly addressing the matter. As previously reported by BoxingScene.com, the WBO issued a Show Cause order to Jimenez on January 29, with the boxer granted a 10-day period to prove herself to be a clean fighter.

To date, the only public action taken by Jimenez—other than claiming contamination and providing two clean tests dated December 15, 2019 and January 11, 2020—was to request for her “B” sample to be opened and tested.

Baltimore’s Crews-Dezurn tested negative on all three occasions. The former titlist as well as her promoter, Golden Boy Promotions both politely declined comment to BoxingScene.com on the latest development, as it has not yet been announced.

Meanwhile, the WBC suspended recognition of Jimenez as its champion, as announced on February 4 and pending the completion of its investigation.

The next step will be for the sanctioning bodies to determine whether to return the belts to the original owner.

Jimenez—a former heavyweight titlist—entered the January 11 clash as the mandatory challenger to the WBC title which Crews-Dezurn (6-2, 2KOs) claimed in a September 2018 points win over Maricela Cornejo in Las Vegas. The two were originally due to meet last September, only for Jimenez to have to withdraw after visa issues prevented her from entering the United States in time to proceed with the bout.

Crews-Dezurn instead faced Cornejo in a rematch, once again claiming a decision win and picking up the vacant WBO title in the process. From there came the rescheduled mandatory title fight, for which Crews-Dezurn requested full VADA testing—just the second female title fight to undergo unrestricted testing. The first came in Ireland’s Katie Taylor successful quest to become a two-division champion, when the unbeaten and undisputed World lightweight champ outpointed Christina Linardatou to win the WBO 140-pound title last November.

Their bout came on the heels of VADA’s involvement—through the WBC’s Clean Boxing Program—in the featherweight title fight between Amanda Serrano and Heather Hardy last September in New York City. The bout marked the first time female fighters were subject to random drug testing in the professional ranks beyond standard commission testing.

Serrano added to her record-setting title collection with a 10-round decision win in reclaiming her old featherweight belt. Hardy suffered her first career loss, along with having also tested positive for the banned substance Lasix, for which she was issued a six-month suspension (since reduced to four, though pending proof of being medically fit to return to the ring) and a $10,000 fine by the New York State Athletic Commission.

To date, the Texas commission has yet to levy a fine on Jimenez, who—along with her promoter, Pepe Gomez’s Cancun Boxing—plan to appeal the official ruling. Barring a reversal of fortune, there exists the strong likelihood that her current status as a two-division titlist will be reduced to that of former heavyweight titlist—with the remaining question of when Crews-Dezurn can expect to get back her belts.

Alexandra is a man, transformed into a woman ....this dude should be banned from boxing....IT can't fight a man/ woman

I don’t know but her last name is suspect from the Illuminati. “He-Man-is”

[QUOTE=anonymous2.0;20403094]What I don understand is why it took so long. Why was she given three dates to chose from in the first place? Commission should have ripped that jar open immediately[/QUOTE] I mentioned in this story as well as my…

[QUOTE=anonymous2.0;20403094]What I don understand is why it took so long. Why was she given three dates to chose from in the first place? Commission should have ripped that jar open immediately[/QUOTE]I ain't looked into this case deeply enough to know,…