Alberto Machado: I Want To Beat The Other Champions at 130

Alberto Machado will be doing more than just defending his world title tonight.

Machado will be representing and calling out attention to the thousands of people in Puerto Rico still attempting to recover from Hurricane Maria in September. As his fellow countrymen continue to rebuild and recover, Machado will attempt to prove he is the best fighter at 130 pounds.

Machado will defend his WBA junior lightweight title against mandatory challenger Rafael Mensah at the Hard Rock Hotel and Casino in Las Vegas. 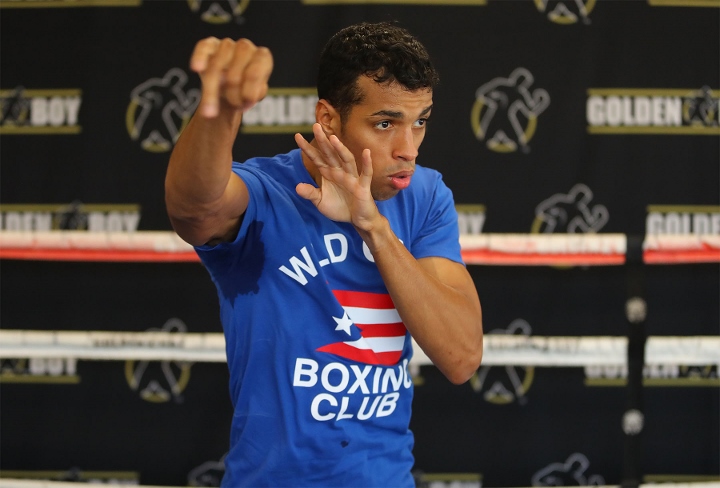 The 12 round bout will precede the 12 round junior middleweight bout between WBO titleholder Jaime Munguia and challenger Liam Smith. Both fights will air live on HBO (10 p.m. ET/ 7 p.m. PT).

Machado (19-0, 16 knockouts) will be defending the title for the first time. The 27-year-old from San Juan rallied from a knockdown and was down on the scorecards to knock out Jerzeel Corrales in the eighth round.

He will face a fellow southpaw in Mensah (31-0, 23 KOs), who will be fighting for the first time outside of Ghana. Mensah has not fought the level of opposition Machado has, with his two most notable victories coming over Justin Savi and Fatiou Fassinou.

Machado is not overconfident in facing Mensah.

"I don't know a whole lot about (Mensah)," Machado told Boxingscene.com in a phone interview. "I just know he's a southpaw from Ghana and has over 30 fights as a pro. I just have to go in there with the mentality to listen (trainer) Freddie Roach and to have the will to win."

Machado, who is co-promoted by Golden Boy Promotions and Miguel Cotto Promotions, has kept in touch with family and friends in Puerto Rico while he has been training at the Wild Card Gym in Hollywood, California.

Most basic services, such as electricity and running water, has returned to most of the people on the island, but several people still left in the dark. Machado will carry his fellow countrymen in spirit with him to the ring tonight.

"I have a lot of emotions and it's difficult to explain," said Machado, who goes by the nickname of 'El Explosivo.' "Many people on the island have not recovered from the hurricane. Puerto Rico is still struggling. They were not prepared for such a big natural disaster. I'm going to carry the flag (tonight) for the people of Puerto Rico."

Machado wants to unify the division. A likely fight with Gervonta Davis could take place later this fall or in early 2019 to decide the outright WBA title or against WBC titleholder Miguel Berchelt.

The WBO and IBF title belts are currently vacant, but will have a titleholder in the next few weeks as the two highest ranked fighters will fight for those belts.

Machado wants to prove he is the best fighter at 130 pounds.

"I want to demonstrate that I'm one of the best fighters in boxing. I want to defeat the mandatories and beat the other champions in the division."

Well first you got win tonight!! you don't have an easy fight let see i got you by decicion an MUNGUIA BY KO !:boxing::boxing:

Machado by way of Brutal KO.

I woke up with that feeling too. Between this fight of Machado with Mensah and Munguia with Smith, there's going to be an upset tonight

Have a feeling Machado is getting laid out tonight by Ike's nephew.