Alantez Fox dropped Nick Brinson once en route to a sixth round stoppage win Saturday night at the Entertainment and Sports Arena in Washington, DC.

Saturday’s fight marked Fox’s second fight since his decision loss to Demetrius Andrade in October of 2017. After the fight, Fox had to have surgery on a torn rotator cuff in his right shoulder and he also suffered a torn ligament in his right elbow. 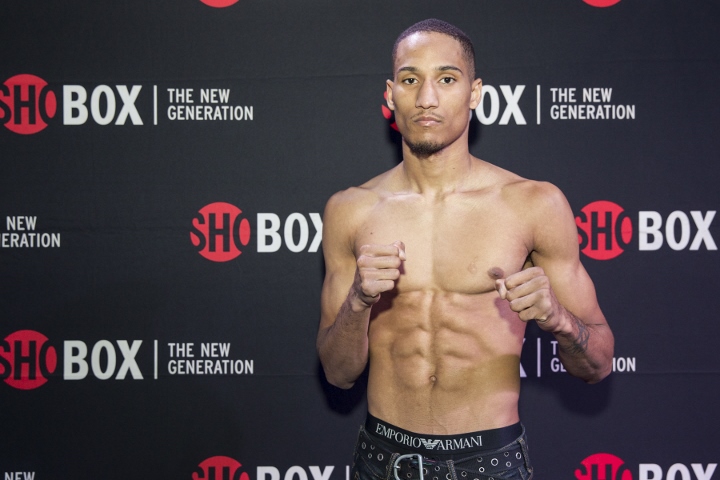 In his last bout on Sept. 22, Fox, who resides in nearby Upper Marlboro, Maryland, defeated former contender Elvin Ayala by unanimous decision over eight rounds.

Brinson entered the fight against Fox having won three of his previous four bouts.

Utilizing a six-inch height and a significant reach advantage, Fox was early on, connecting with several right hands to the head from the opening bell. Midway the first round, a counter right hand dropped Brinson to the canvas. Brinson was not visibly hurt and fought on after getting up from the canvas.

Brinson did find success in spots, connecting with an occasional lead or counter right hand to the face of Fox. As the rounds progressed, Fox’s accurate punches began to take their toll on Brinson, whose punch output dropped significantly with each passing round.

Fox let his hands go more in round six, battering Brinson to the head. It was enough for Brinson’s trainer to throw in the towel, prompting referee Gene Del Bianco to stop the bout at 2:46.

“Everybody counts you out after one loss,” said Fox after the fight. “No one understands what I went through to get my arm back (to 100 percent). We’re back.”

The 27-year-old Fox weighed in at 163.2 pounds for the fight. Promoter Lou DiBella told BoxingScene on Thursday that a decision will be made whether Fox would campaign as a middleweight or move up and fight at 168 pounds.

In the co-feature bout, junior lightweight Tiara Brown broke Angel Gladney down before stopping her in the sixth round. With the win, Brown won a regional title belt.

The taller Brown, who is a police officer in Washington, rained punches down on Glandey, who attempted to get on the inside, but would get caught with counter lefts and rights.

As the bout progressed, Brown’s punches began to take their toll on Gladney (10-15-1, 6 KOs), who resides in South Carolina. The amount of punches Brown landed brought louder cheers from the crowd with each passing round.

A barrage of punches from Brown in round six prompted referee Kenny Chevalier to step in and stop the bout at 34 seconds.

The southpaw Harris (16-0, 8 KOs) was dominant throughout the fight, landing several combinations to the head and body of Woods. By the end of the second round, the taller and lankier Woods (10-24, 3 KOs) was feeling the effect of Harris’ punches, where he began to grab onto Harris.

Johnson finally saw enough at 2:06 of the round, stopping the fight and disqualifying Woods after he again grabbed Harris.