Yomar “Magic” Alamo will end his 2019 campaign the same way it began—by serving as the headliner for seasonal premiere of Boxeo Telemundo in Central Florida.

The unbeaten 140-pound prospect from Caguas, Puerto Rico will seek his 3rd win of the year as he collides with Mexico’s Antonio Moran in a 10-round regional title fight. The bout will take place Oct. 4 at Osceola Heritage Park in Kissimmee, Fla., marking Alamo's third straight fight at the venue and fourth in a row in Kissimmee.

“It’s ‘Magic’ time once again,” Felix ‘Tutico’ Zabala, president of All Star Boxing Inc. quipped to BoxingScene.com of the 24-year old’s next outing. “Yomar Alamo has quickly emerged as a series favorite, and in tough with another popular Telemundo attraction in Antonio ‘Tono’ Moran. 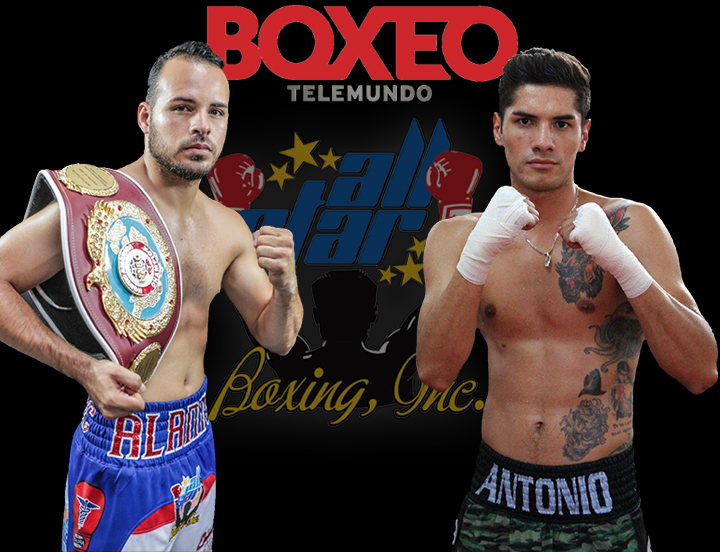 “This is a great matchup between two contenders that will provide the fans with an exciting kick off to our Boxeo Telemundo 30th anniversary Fall Series.”

Alamo helped put a bow on the Telemundo summer season, topping the Aug. 2 finale in a 10-round win over Mexico’s Salvador Briceno. The bout was pieced together on a week’s notice, due to Alamo’s originally scheduled opponent Miguel Angel Martinez, whose schedule was bumped up a week to help salvage a July 26 Telemundo card that nearly lost its main event at the scales.

Whomever is in the opposite corner has always been of little concern to Alamo, who makes his fourth consecutive appearance both on the network and in Florida. His debut came last summer, scoring a 4th round knockout of Wilfredo Buelvas at the Kissimmee Civic Center.

Friday’s start marks his third consecutive main event at Osceola Heritage Park, which will likely play to a sold-out crowd as has been the case every time the series has traveled to the venue.

On the other side of the bill, Moran (24-4, 17KOs) takes a big risk in hopes of returning to the win column.

The 26-year old from Mexico City fights for just the third time in the United States, his previous two trips both ending in defeat. He gave Puerto Rico’s Jose Pedraza all that he could handle in a 10-round loss last June, less than three months before Pedraza became a two-division titlist in outpointing Raymundo Beltran for the lightweight title last August.

Moran returned home with a knockout win last December (on Telemundo) before being brought back stateside for his most recent outing. He landed on the wrong end of a highlight reel knockout this past May, as he was blasted out in seven rounds by unbeaten lightweight Devin Haney who has since collected an interim title just this past weekend in New York City.

There have been plenty of credible wins among the honorable defeats, including four consecutive knockouts all in front of the Telemundo cameras dating back to March 2017.

“It says a lot that Tono is taking a fight like this, when he could easily ask for a softer touch after his last fight,” notes Zabala. “Both fighters are taking a tremendous risk, and those normally produce the best fights.”

Also on the bill is Nuyorican knockout artist Edgar Berlanga (12-0, 12KOs). The 22-year old will appear versus a yet-to-be-scheduled opponent in a middleweight bout slated for eight rounds. So far, he’s only needed one round to end each of his 12 fights to date, racking up his latest 1st round knockout live in front of an ESPN+ audience this past August in Philadelphia, Pa. He was also a smash hit in his outing prior to that, taking place in this very venue with a 43-second blitzing of Gyorgy Varju this past May.

The show comes in conjunction with the network celebrating its 30th anniversary in the boxing business.

Hopefully Berlanga gets put it with someone decent , really want to see what he can do vs good opposition