Ajagba: I'm One, Two Years Away From Fighting Top Heavyweights

Efe Ajagba will take what could be considered a slight step up in competition Saturday night in Las Vegas.

The hard-hitting Nigerian heavyweight is set to square off against Germany’s Michael Wallisch in a 10-rounder Showtime will broadcast from The Chelsea inside The Cosmopolitan. The 33-year-old Wallisch was unbeaten before Germany’s Christian Hammer knocked him out in the fifth round of Wallisch’s last fight, December 15 in Hamburg.

“In one year, or maybe two, I think I’ll be fighting against top guys,” Ajagba said at a press conference Thursday at The Cosmopolitan. “We’re going to keep stepping up. This is my first time fighting on Showtime, so I’m looking forward to that step.” 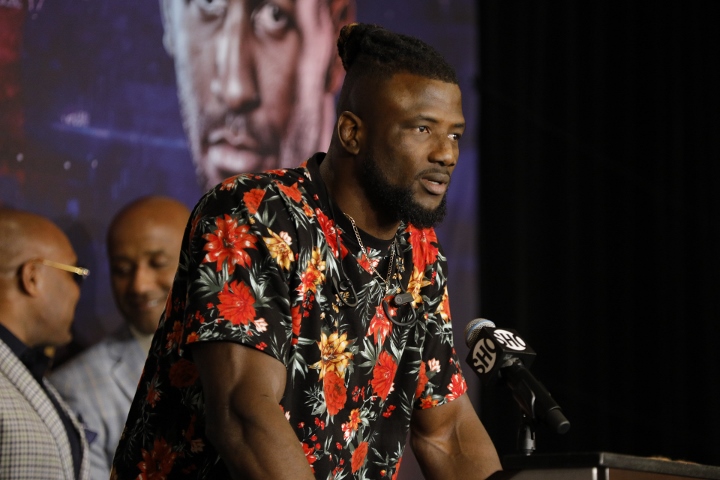 The only bout Ajagba hasn’t won by knockout since he turned pro in July 2017 was his infamous fight last summer against journeyman Curtis Harper. Ajagba won that bout by disqualification once Harper left the ring immediately after the opening bell sounded August 24 in Minneapolis.

Since the Harper farce, Ajagba has won three straight bouts by knockout, including a two-round demolition of 46-year-old Amir Mansour on March 9 in Carson, California. The 25-year-old Ajagba anticipates extending his knockout streak Saturday night.

“It’s up to my opponent how long the fight lasts,” Ajagba said. “I never say I’m going in to knock him out. I have to feel it and find the moment, and see what he gives me.”

Ajagba is the real deal, but he's still very raw. No need to rush him too fast. It's good that PBC and the guys they work with have a lot of C-tier heavyweights they can use to develop him in…

I've seen this before. Samson Pouha was taking it slow then got fed to the wolves. Taking too much time going to get stale with uncorrected habbits. Especially in Miami. Needs to be pushed, tested, hit! Get this guy top…

A years maybe too soon

Ajagba is the the most promising prospect at heavyweight right now. He will have a easy time time against Wallish and stop him inside 3 rounds for sure. But he is right he just had 9 fights and needs more…

There are several good prospects who seem not to fight good boxers. Hrgovich, Ajagba, Yoka, Dychko, Milas, Ehwarieme...and more, have at most had one decent opponent, since they started. When will they decide to face one another to decide who's…