In the main event of the night, co-promoted between Sports Studio Top Gym and Suleimen Promotions in Minsk, Belarus - WBA #2 / WBO #7 / IBF #13 super middleweight Aidos Yerbossynuly further improved his credentials with a one-sided beating of Germany-based Nigerian Nuhu Lawal, who was no match for his opponent.

Lawal, the smaller of the two, stayed low, used swinging punches and held onto his opponent whenever it was getting hot. Yerossynuly, 28, a former Kazakh amateur standout, easily and readily saw all the blemishes of such tactics and exposed his foe every possible moment.

Lawal was down in the second and was on unsteady legs after the mid-point, while the Kazakh fighter, despite eating some leather, was never in danger of losing a single point. Yerbossynuly was well ahead in every single round. 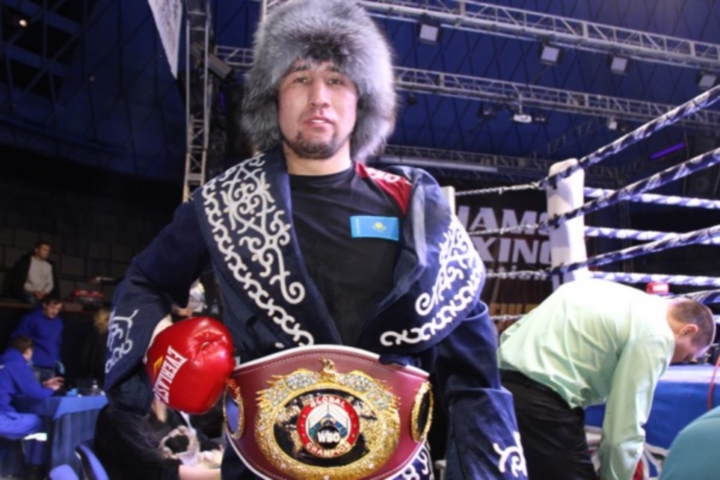 Former wrestler Zhangabaev was his usual aggressive self in the first before suddenly running into Messaoud’s left hook that put him down briefly in the second. Zhangabaev started running after the Frenchman, and the latter obliged utilizing his highly unorthodox approach to trouble the Kazakhstani.

Things got even worse for the favorite in the third, when Messaoud rocked him again by opening a cut over his right eye. Zhangabaev evened the fight in the fourth, then the bout evolved into a see-saw, with none getting an upper hand but Messaoud looking favourably.

The cut got worse as rounds progressed, and finally the bout was stopped near the end of the seventh. Scores at the time of stoppage were: 68-64 - for Zhangabaev, and 68-64, 68-63 - for Messaoud, who is now the WBA I/C, IBF Australasian and WBO Oriental welterweight titlist.

Georgian heavyweight Tornike Puritchamiatshvili gave veteran Russian/Belarussian contender Alexander Ustinov some resistance to overcome and some work to do, when an arm injury forced his retirement after the second stanza.
After the slow first, Tornike connected with a hard punch in the second, which in turn was too much of a price for the delivering fighter. Ustinov (36-4, 27 KOs) got back, had his moments too, roughed the Georgian a couple of times and came out as a winner after all. Puritchamiatshvili is down to 9-14, 6 KOs.
————————————
Heavyweight Nursultan Amanzholov moved to 3-0, 2 KOs, after his opponent Drazan Janjanin retired on his stool after two complete rounds.
The stocky and pudgy Bosnian pressed the action against his lanky foe but was swinging mostly way off mark, despite connecting with some hard shots in process putting the Kazakh onto defensive. Amanzholov was otherwise careful and composed while Janjanin, too much weight on him, was rapidly losing his steam and power. Totally gassed out he has chosen not to go after the second, despite no knockdowns from either fighter, thus dropping his record to less-than-mediocre 20-31, 17 KOs.
————————————
Kazakh middleweight Bek Nurmaganbet made a convincing pro debut by stopping overmatched Hungarian Tamas Laska (19-22-1, 10 KOs).
The 22-year old amateur standout gave his journeyman opponent zero time to adjust and no room to breathe, dropping him midst into the first, then cornering him and breaking Laska, 23, down with a debilitating right to the spleen. Laska lost for the eighth straight time (all losses were inside the distance). Nurmaganbet is a fighter to look after, specifically bearing in mind his amateur credentials.
Tags:
Alexander Ustinov

Oh yeah, Ustinov back in the win column baby! Send him back to England to fight Pricey!!! :boxing:

Some good fights in there to dig.:boxing: