As promised, Adrian Granados gave Adrien Broner everything he could handle Saturday night.

Broner dealt well enough, however, with the gritty Granados’ pressure and toughness to win a split decision in their 10-round welterweight fight in Broner’s hometown of Cincinnati. Broner (33-2, 24 KOs) won on two scorecards in a rough fight against his former sparring partner that featured several close rounds that were difficult to score.

Weisfeld also credited Broner with winning the 10th round. Rogers scored it for Granados.

“I knew Adrian Granados was gonna come as tough as a steak that was cooked too long,” Broner said. “But at the end of the day … I done been in more dirt than cleats and I’ve done beat up beef like Rocky in the meat freezer, man. And, as you could see, this is like four minus one. This was an easy one for me. I’m OK.” 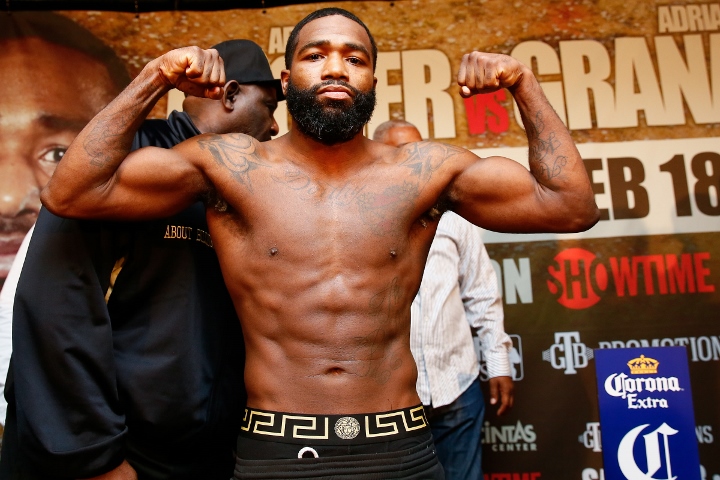 Broner fought for the first time in 10½ months, but didn’t consider his long layoff an issue.

“I don’t make excuses,” Broner said. “Like I told you before, Adrian Granados is a world-class fighter. A lot of guys duck him, but I wanted to fight him because I knew he would bring the best out of me.

“But nobody know I hurt my hand in the first round. I hurt my left hand when I – when we first came out, I hit him with a hard left hook. I hurt my hand. From then, my left hand was no good. That’s why I couldn’t throw my jab as much. But, you know, I went through it. That’s why I had to stay on the inside. If I didn’t stay on the inside, I had no chance because I couldn’t throw my jab. So I had to adjust to what I had.”

The sharper Broner was able to exploit Granados defensive deficiencies as Granados often walked forward with his hands down. The former four-division champion also landed the more eye-catching punches.

Granados was the busier boxer throughout the bout, but Broner landed more overall punches as well.

Granados (18-5-2, 12 KOs), of Cicero, Illinois, lost by split decision for the third time in his eight-year pro career. He also has lost a pair of majority decisions.

“I thought I out-worked him,” Granados said. “I knew it wasn’t a pretty fight, but, I mean, hey, shout out to Chicago. Thank you for coming out. … Y’all already know, there was all types of controversy. They were playing with me. We had to change the weight [from 142 to 147]. We had to change the scale. They was playing all types of f*cking games. That’s some bullshit, man. Give me a fair go. Give me the first weight. Do it right away. Y’all always treat me like some dumb ass. Come on, man. This is some bullsh*t.

“Look it. I understand I ain’t got the perfect record. Y’all could talk about whatever losses, y’all know I could beat any of these guys, man. Come on, man. Ya’ll seen the scorecards. Split decision. Give me another one. Let’s do it again.”

Granados challenged Broner to give him in rematch in Chicago, where Granados trains. Broner basically told him he wouldn’t even consider doing that.

Broner and Granados made it clear throughout the promotion of their fight that they’re friends. They became friendly when Granados was one of Broner’s sparring partners during his training camp prior to a December 2013 loss to Marcos Maidana.

They still delivered a competitive, compelling fight in the main event of Showtime’s tripleheader from Xavier University’s Cintas Center.

There were plenty of exciting exchanges in the fight, but Broner couldn’t stop Granados from coming forward, no matter how hard he hit him. It was clear it would be this type of difficult fight for both boxers early.

Granados stung Broner with a right hand around the midway mark of the second round, which left Broner holding near the ropes.

A brawl broke out in the third round, when Broner and Granados traded power punches. What appeared to be an accidental head-butt by Broner opened a cut across the bridge of Granados’ nose in the third round as well.

Each fighter had his moments in the fourth and fifth rounds. Granados continued to be the busier fighter in those rounds, but Broner was the more accurate puncher.

They traded hard left hooks to the head in the sixth round, another three-minute period in which Granados proved he wouldn’t go down, no matter what Broner hit him with.

They continued to trade throughout the ninth and 10th rounds, both of which were very competitive.

The 27-year-old Broner fought for the first time since he stopped England’s Ashley Theophane in the ninth round April 1 in Washington, D.C. Granados, also 27, dedicated the fight to the memory of his close friend, Ed Brown, a promising welterweight prospect who was shot to death two months ago in Chicago.

[QUOTE=inidouh;17436259]You're in denial and living in pure fantasy. You or I have know knowledge of how much Chino made against Mayweather or anything about Chino's financial situation. I could name a half dozen fighters who have purportedly earned big paydays…

I remember when Broner was a busy fighter. Other than his stupid ass antics of showboating....he was entertaining to watch. Those quality fights are gone after losing to Maidana and Porter.

[QUOTE=NEETzsche;17437202]Khan is a winnable and saleable fight. I would like to see that next[/QUOTE] I Khan doesn't have the greatest chin but I think his speed and range would be to much for Broner. Broner has proven he didn't carry…

[QUOTE=Shadoww702;17437087]He needs a new one ASAP! He should be on the phone with Robert Garcia or Raoch. Who I usually never would recommend but would make Broner more offensive and WAY better to his strengths. We ALL saw last night…

Not sure why Broner is trying his luck again @ WW. He won't hold up against the true top WWs. The guy is just too small & weak for the division. He barely beat his former sparring partner, who has…