Adrien Broner’s next adventure officially has a home.

The super lightweight titlist’s previously announced April 1 clash with Ashley Theophane will headline at the D.C. Armory in Washington, D.C., as confirmed by Premier Boxing Champions (PBC) brass on Friday. The bout will air live as the first installment of PBC on Spike TV in 2016 following an incredible rookie season for the network in 2015.

Broner (31-2, 23KOs) will make the first defense of the super lightweight he claimed in a 12th round knockout of Khabib Allakhverdiev last October. His fourth title win in as many weight divisions came in his hometown of Cincinnati, Ohio. 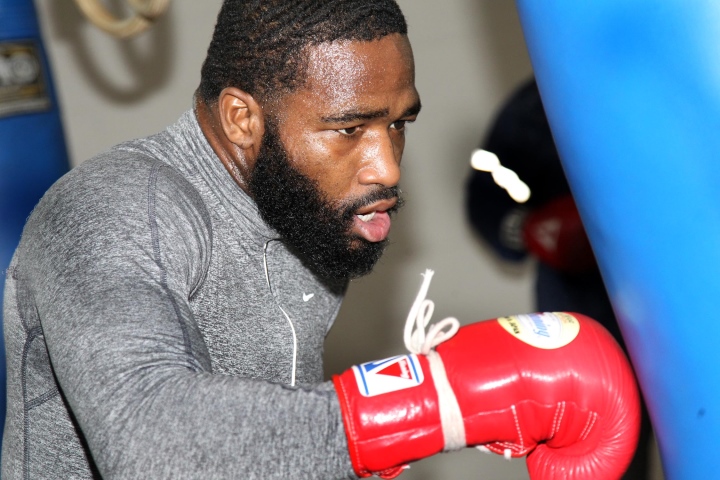 The upcoming bout with Theophane will mark his first fight in D.C., where he regular trains in splitting his training camp between Cincinnati and the nation’s capital. Broner recently moved his training camp to Headbangers Gym in D.C., run by Barry Hunter who works with the brash boxer alongside head trainer Mike Stafford.

Theophane (39-6-1, 11KOs) enters his first career title fight. The hard-luck contender from England – who is promoted by Mayweather Promotions and trains out of Mayweather Boxing Gym in Las Vegas – remains best-known for giving Danny Garcia a stiff challenge in their Feb. ’10 matchup when both were considered rising prospects at the time.

Garcia won a split decision in their ESPN2 Friday Night Fights headliner, going on to capture titles at super lightweight and welterweight.

It hasn’t been quite as glorious for Theophane, although he comes in riding a six-fight win streak following a disputed points loss to Pablo Cesar Cano in Sept. ’13. His most recent win came last April, scoring a 10-round decision over Steven Uphser Chambers two nights before his promoter, then reigning welterweight and pound-for-pound king Floyd Mayweather outpointed Manny Pacquiao in the most lucrative boxing event ever.

Mayweather and Broner have enjoyed an odd bromance through the years, though one that dissolved into a public feud last fall. The bickering between the two served as the evolution for this very fight, with Mayweather “daring” Broner to next face his kid had he won his fight with Allakhverdiev, which of course became the case.

Broner accepted the challenge, but the hold up in moving forward with the fight was due to PBC brass sorting out its first quarter schedule before proceeding with a fitting home – network and physical location – for the event.

While the main event has been the subject of harsh criticism, the suggested co-feature is met with much warmer embrace. Broner’s stablemate, unbeaten Robert Easter Jr. steps up in class as he takes on former 130 lb. titlist and current lightweight contender Algenis Mendez.

Another possibility for the live broadcast – though strictly in the rumor stage at this point – is the return of fringe middleweight contender J’Leon Love, who is also promoted by Mayweather.

The announcement of the D.C. Armory as the host gives the site its second major boxing event in less than a month. Up next for the intimate venue is a March 5 HBO-televised show, featuring unbeaten heavyweight Luis Ortiz versus local veteran Tony Thompson as well as a vacant welterweight title fight between unbeaten 2008 U.S. Olympian Sadam Ali and former 140 lb. titlist Jessie Vargas.

[QUOTE=Corelone;16481711]Broner by KO, unless Theo come's serious. Then Broner by Dec, unless Broner underestimates him. Then Theo by close decision, but that's slim.[/QUOTE] Excellent post and very insightful

Broner by KO, unless Theo come's serious. Then Broner by Dec, unless Broner underestimates him. Then Theo by close decision, but that's slim. thanks for that serious expert breakdown, have you considered working for HBO?

Broner by KO, unless Theo come's serious. Then Broner by Dec, unless Broner underestimates him. Then Theo by close decision, but that's slim.

Not feeling the matchup. Good location though, I remember that venue having some lively crowds..Broner will play it up I'm sure.