The powerful southpaw overwhelmed Andrzej Fonfara in their light heavyweight championship rematch Saturday night and stopped the Polish contender in the second round of the main event of a “Showtime Championship Boxing” doubleheader at Bell Centre in Montreal. Stevenson dropped Fonfara in the first round, in which Stevenson nearly knocked him out, pounced on Fonfara at the start of the second round and forced Virgil Hunter, Fonfara’s trainer, to tell referee Michael Griffin to stop the fight 28 seconds into the second round.

The 39-year-old Stevenson improved to 29-1, recorded his 24th knockout and retained his WBC light heavyweight title.

“He got me in the [first] round with a punch,” Fonfara said. “That changed everything. I tried to punch him with a right overhand, and he got me I think with his left hook. After that, I was not the same. But, you know, he showed me tonight he’s really a champ. I must rest now, back to work out again, train harder and come back harder.” 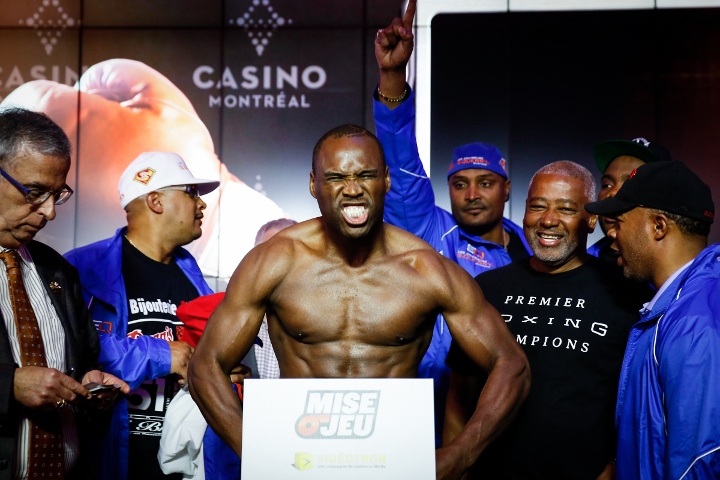 Fonfara paid for being aggressive in the first round, as the effect of Stevenson’s counter left hand to the side of his head sent Fonfara to the canvas right around the midway mark of the round. Fonfara, whom Stevenson also dropped in the first round of the first fight, barely survived the first round because Stevenson hurt him again later in it and unloaded a barrage of power punches near a neutral corner in an attempt to finish him.

The bell basically spared Fonfara another first-round TKO defeat, but Stevenson didn’t need much more time to finish off Fonfara.

Stevenson attacked a dazed Fonfara at the start of the second round and wobbled the vulnerable challenger with a straight left hand to the middle of his face 15 seconds into it. Hunter walked up to the ring apron soon thereafter, as Fonfara stumbled backward from two more vicious Stevenson lefts, to instruct Griffin to stop the fight.

Fonfara remained on his feet when Stevenson’s onslaught was stopped, but Fonfara agreed with Hunter’s decision during his post-fight interview.

“There was no need to continue,” Hunter said. “He was hurt in the first round. He survived, but even when he came back to the corner he wasn’t all the way there. I told him in the second round, ‘Don’t even throw a punch. Just defend until you get yourself back.’ These things happen. I thought he was doing quite well until he fell in and got caught with a punch.”

Stevenson won their first fight by unanimous decision, but had to get off the canvas in the ninth round to retain his title in a 12-rounder. Before Fonfara floored him with a right hand early in the ninth round, Stevenson had dropped the challenger once apiece in the first and fifth rounds.