This isn’t what Abner Mares wanted, but he understands that Leo Santa Cruz is the ‘A’ side in their business equation.

Mares would’ve preferred to fight Santa Cruz again October 7 at Staples Center in Los Angeles, the option that they had long discussed. Santa Cruz feels he needs to shed some ring rust, though, which is why Mares and Santa Cruz will face separate opponents on October 14 at StubHub Center in Carson, California. 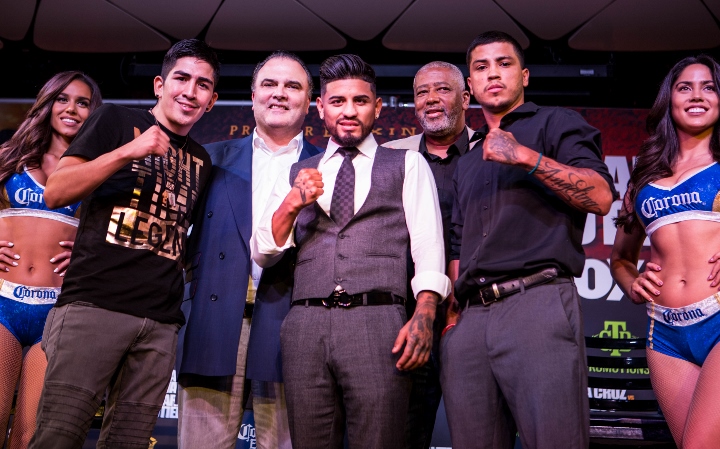 “I wanted to fight Leo right away,” Mares told BoxingScene.com prior to a press conference Tuesday to officially announce their October 14 doubleheader. “It’s not a secret I’ve been telling everybody the fight was gonna happen [October 7] because at first it was confirmed, like 99 percent. But that other percent was Leo’s team and his side. They felt, and I understand, that they needed one tune-up fight. So no harm there. We took it, so now I have to go and take my fight also, and hope that we both come out victorious and healthy to make that [rematch] happen.”

Mares, of Montebello, California, feels he has the tougher fight October 14, but if Mares and Santa Cruz win they have agreed to take part in a rematch within the first quarter of 2018. Santa Cruz beat Mares by majority decision in their first fight two years ago at Staples Center.

The 31-year-old Mares admits he was surprised Santa Cruz pushed for interim bouts, but the former Mexican Olympian is willing to do whatever it takes to get his shot at redemption.

“I was a little bit surprised, but then again, him, as a fighter, he’s coming from two tough fights back-to-back,” Mares said, referring to Santa Cruz’s fights against Carl Frampton. “So if the body tells you that you need rest, you have to listen to it. So I can’t say I was surprised. I was coming from a tough fight, also, and a longer layoff, but I felt like it was a perfect time to get that rematch. Again, bodies are different.”

The 29-year-old Santa Cruz, of Rosemead, California, defeated Frampton by majority decision to win back the WBA super world featherweight title January 28 in Las Vegas. That 12-round win enabled Santa Cruz to avenge a 12-round, majority decision loss to Northern Ireland’s Frampton (23-1, 14 KOs) in July 2016 at Brooklyn’s Barclays Center.

Mares will end an even longer layoff than Santa Cruz on October 14. He hasn’t boxed since he beat Argentina’s Jesus Cuellar (28-2, 21 KOs) by split decision to win the WBA world featherweight title December 10 in Los Angeles.

Santa Cruz us coming off two straight fights with Frampton. You guys are such ingrates.