CAGUAS, P.R. - Both Abner 'Pin' Cotto and Danielito Zorrilla, who are promoted by Miguel Cotto Promotions, picked up big wins on Saturday night at the Caguas Coliseum Roger L. Mendoza.

Both fighters were able to secure stoppage victories inside the distance.

Junior welterweight Zorrilla secured the big win in the fourth round to improve his mark to 4-0 with four knockouts - gaining the victory by knockout at 2:20 of the fourth over Peñolano Josué Lozada (1- 1). 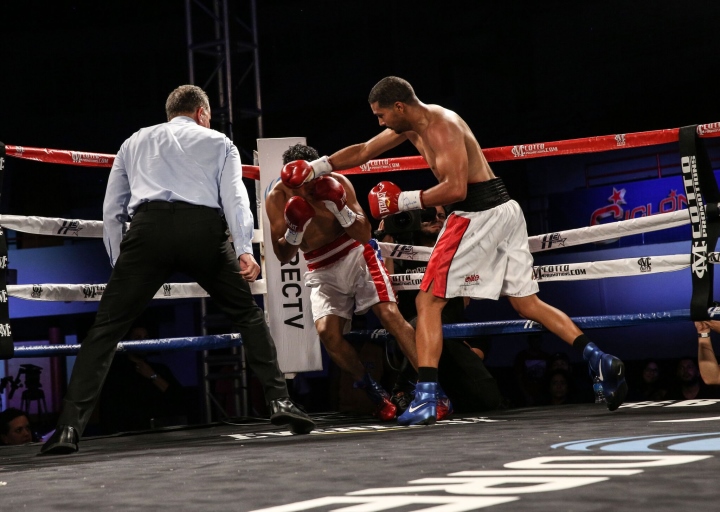 Cotto (22-3 and 11 KOs), also fighting at 140 pounds, had scored two knockdowns over Mexico's Jorge 'Pitbull' Rodriguez (10-1 and 10 KOs) in the first round to secure his triumph by TKO to 2:23 of the same round. It was Cotto's fourth win in a row since getting knocked out by Javier Fortuna in 2014.

"I actually went in there very calmly, to see what he was going to do," said the 31-year-old Cotto in explaining his strategy for the scheduled eight-round bout.

"But I think he underestimated me and he relied too much on his strength and his punch and he was wide open for the left hook to the chin."

Evidently injured, Rodríguez managed to rejoin the contest, but shortly afterwards the referee stopped the fight when it was proven that he was not able to continue fighting.

For his part, Zorrilla, who fought for the first time over six rounds, was methodical in his performance against Lozada, a tall and strong fighter and managed by veteran world contender Orlando 'Fenómeno' Cruz.

Lozada, in fact, had his moments with an occasional right straight and a good jab.

"He's a good fighter," Zorrilla said, "I knew what I was doing and I had good hands. But I wanted to take things slowly, because I knew it was a matter of time, even though from time to time I threw the closers."

Lozada was dropped twice in the fourth round before the referee stopped the fight.

Meanwhile, Magdiel Cotto improved to 8-0 with seven KOs as he dispatched left-hander Miguel Queliz (5-5-1 and three) in the third round.

Zorilla is a prospect to follow, Abner Cotto is improving actually and getting stronger... we got some good prospects but i dont wanna go ahead, so lets see.. for sure for sure i know Emmanuel "Manny" Rogriguez will be champion,…

Too early to tell, but so far so good for Danielito "El Zorro" Zorrilla. Subriel "Browny" Matias Matthews also scored a KO last weekend. Steady progression, let's see which one of these prospects can step up. C'mon P.R. boxing, let's…