Sometimes the first question is the toughest one. In the case of Aaron Aponte, son of a Puerto Rican father and an Argentinean mother, it has to be asked how the six-footer makes 140 pounds with such a rich culinary history in his blood.

“I guess I train so hard that I burn all the calories off,” Aponte laughs. “I love the food; it's my favorite food in the world. But I got that fast metabolism.”

Ah, the benefits of being 18 years old. But all joking aside, this should have been the best couple weeks of the Floridian’s career, as he ended a 98-18 amateur career by signing with respected manager Peter Kahn and announcing his intention to turn pro.

What could spoil the March 30 announcement? Just the COVID-19 pandemic. Now that’s the epitome of bad timing, but at least with no boxing in the news, he had the headlines to himself for a bit. And when this all ends and the world returns to some normalcy, he’s hoping to break in that normalcy.

“I'm hoping I can be one of the first fights so everybody watches me,” said Aponte, who initially hoped for an early June debut. That may happen if things improve, but in the meantime, he’s staying ready so he doesn’t have to get ready.

“I'm staying in the gym,” he said. “My dad owns the boxing gym that I work out at and he's my trainer, so we have it closed down, but we train by ourselves.”

And for the record, there is no sparring with dad, Reniel.

“No, we're staying away from sparring and any contact,” chuckled Aponte, who continues to lead a life unlike most teenagers. It’s all he’s known since the time he first put gloves on at the age of nine. Yeah, that’s half his life, and even though there was baseball played, as well, boxing has always held his heart. Well, at least from the time he scored his first knockout at 13.

“As soon as I started, I knew this was for me,” he said. “But when I was 13 years old, I knocked my first person out and I fell in love with knocking people out. (Laughs) So now I want to knock everybody out. It's just a thing I learned to do.” 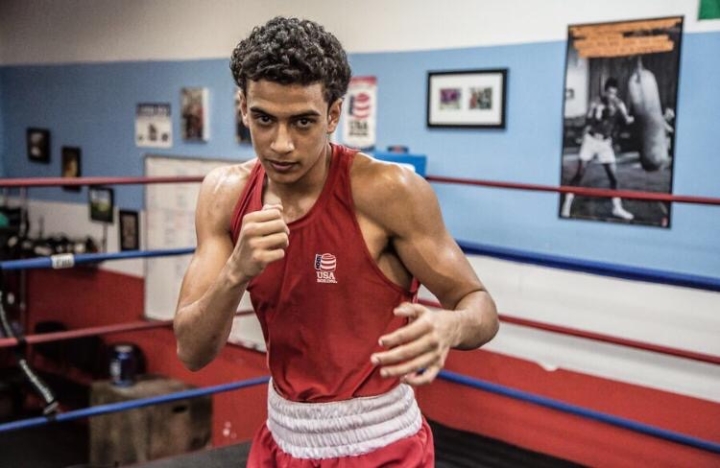 He’s never forgotten it, either, with those around him believing that power will be what turns him from a prospect to contender to champion. And once those opponents started falling, baseball was over for Aponte.

“I was already starting to distance myself from baseball and deciding to be in boxing and having that boxing mentality and knowing that was what I was gonna do for the rest of my life,” he said. “I love baseball, but I just had that connection with boxing. Boxing is what I'm best at, so I chose boxing. I told my dad I don't want to do baseball anymore, I want to box, and that's what I did.”

Nearly a hundred amateur wins and several titles followed, and while he did think of sticking around to represent Argentina in the 2020 Olympics, when COVID-19 arrived and pushed the Tokyo Games to 2021, the decision to turn pro was an easy one.

“After this pandemic happened, we decided to not wait, and to just take the pro opportunity now,” he said. “We thought it was the best time and the best thing for me.”

Especially if he wants to chase more knockouts with those smaller gloves.

“And no headgear,” adds the lanky puncher, who knows that his 18-year-old metabolism won’t last forever.

“I've thought about being a world champion in multiple divisions,” he said. “We're just taking it one day at a time right now because of the pandemic and stuff, but we know that I'll eventually outgrow 140 and move up. I see myself moving to at least middleweight.”

Those are lofty ambitions, but if you can’t have them at 18, when are you supposed to? And as mentioned earlier, this is the honeymoon period, the spring training of a fighter’s life when everything is possible. So, Aponte is enjoying this time, especially when I point out to him that the press release announcing his arrival to the punch for pay ranks included positive comments from trainers Pedro Diaz, Teofimo Lopez Sr., Robert Garcia and Stephen “Breadman” Edwards.

“I'm thankful that everybody has something nice to say about me,” Aponte said. “I've been working really hard since I was nine years old for all those results, so I'm glad it hasn't gone unnoticed.”

That’s a lot of time and a lot of sacrifice. How much sacrifice?

“Everything,” he laughs. “From not being able to go out with my friends to sacrificing meals to making weight, everything. Girlfriends, having to not do certain things. Almost every aspect of life I've had to sacrifice.”

But there must have been something that’s kept him pushing in this most unforgiving of sports.

“The thrill of winning,” he said. “The thrill of getting your hand raised and everybody cheering for you, you would sacrifice everything for that feeling.”

It’s looking that Aponte is going to get that feeling a lot more in the coming years. That’s got to be an exciting prospect knowing that once the world clears up, his life will never be the same again.

“It's a tremendous feeling to know that my life is gonna change real soon,” he said. “Sometimes I can't even sleep at night, just thinking about what's gonna happen in the future.”

Aaron Aponte and other amateurs are going to follow the professionals rank route, because they need money. In that respect, I understand why they are sacrificing going to the Tokyo Olympics 2021. :boxing: